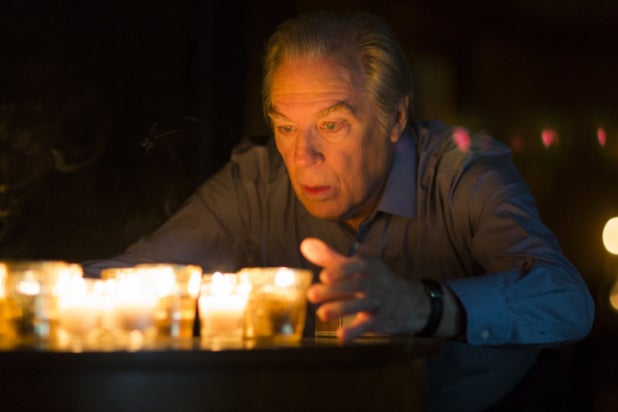 Spoiler alert: Do not read this post if you want to avoid knowing what happened Monday night on the Season 3 finale of “Better Call Saul.”

Season 3 of “Better Call Saul” went out with a bang on Monday — or more accurately, a roaring fire.

The “Breaking Bad” prequel faded to black with a self-set blaze in crazy Chuck McGill’s (Michael McKean) previously nice abode, an apparent suicide attempt. We don’t see the character die, but Jimmy McGill’s (Bob Odenkirk) big bro doesn’t seem of sound enough mind to get himself out of the raging metaphor — or the house.

Another key character we don’t find out the immediate health care fate of is Hector Salamanca (Mark Margolis). Last we see, the drug Don is being loaded into an ambulance after suffering an apparent heart attack, something Nacho (Michael Mando) gets credited by life’s scorer with an assist for. Here’s the thing though: We know Hector makes it to “Breaking Bad, but on that series, he’s confined to a wheelchair and limited to ringing a bell as his only means of communication. Is this medical emergency what seals that physical fate?

We asked executive producer Gennifer Hutchison, who penned the finale, all those questions. Oh, and there was another one: Where the hell was Mike (Jonathan Banks)?

Read our Q&A below, and check back with TheWrap later for more from our conversation with the executive producer.

Also Read: 'Better Call Saul': The Link Between 'The Adventures of Mabel' and Jimmy McGill

TheWrap: Allow me to ask you the obvious questions. First one: Is Chuck dead?
Hutchison: Well, I’ll guess you’ll just have to wait and see…

I thought if I asked really quickly you’d react with just a “Yes” or a “No.” So, it’s purposefully left open ended?
Yes. It’s intentionally a bit ambiguous, though I don’t think it looks particularly good for him.

Is his apparent heart attack what led to Hector’s paralysis?
There are many things that can happen — complications — with heart attacks. Again, that’s something we’re just gonna have to wait and see. But it’s certainly not a good development for him either and his eventual health.

Where was Mike?
Well, as you probably know, this was a pretty big episode. And when we were working on breaking [up] this episode, Mike obviously came up. We love Mike, we love Jonathan Banks.

But given what we had done in the previous episodes and setting up Mike’s further involvement with Gus and now Madrigal — and getting deeper into that world — we felt that we had left him in a good place. As much as it pained us to not have another moment or scene with him in this episode, we did feel that it was a satisfying ending to the storyline.

We obviously always want everybody in every episode, and sometimes they have to redistribute storylines across the last two, just to kind of cover everybody.