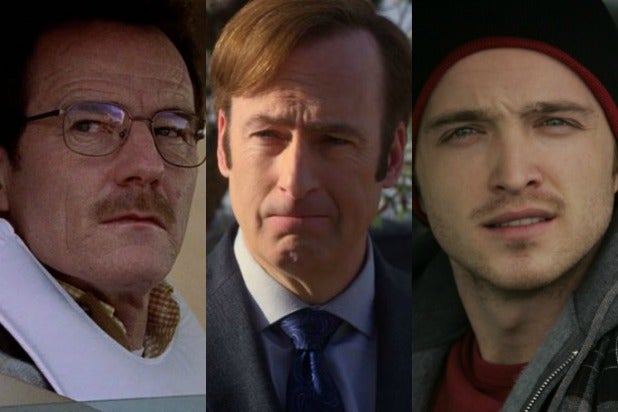 “Better Call Saul” Season 4 will have its biggest crossover yet with “Breaking Bad,” the AMC series it was spun off from.

Co-showrunner Vince Gilligan divulged that the upcoming fourth season of “Saul” will enter into the “Breaking Bad” timeline. “We have a subplot that very squarely gets into ‘Breaking Bad’ territory and brings us into the world — or at least points us on a path toward the world — of Walter White,” Gilligan told Entertainment Weekly. “I can’t wait for folks to see that.”

Gilligan wouldn’t divulge any further details, only saying that the scenes would at least involve Saul (having by then taken on the pseudonym over his birth name, Jimmy McGill). Saul Goodman first appeared in “Breaking Bad” midway through the second season, in an episode aptly titled, “Better Call Saul.”

It’s possible that “Better Call Saul” will show what Bob Odenkirk’s character was up to during the time on “Breaking Bad” before Walter and Jesse first walked into his office. Gilligan had also previously said he wants to find a way to get Bryan Cranston and Aaron Paul to reprise their roles.

Another possibility could include a major subplot during Season 3 that will continue through the rest of the show: The rise of crime lord Gus Fring (Giancarlo Esposito), one of “Breaking Bad’s” main antagonists.

The series was initially set in 2002, roughly six years prior to the events of “Breaking Bad,” which encompass a two-year span from 2008-2010. But with Odenkirk’s Jimmy McGill getting closer and closer to becoming his “Breaking Bad” alter ego, it stands to reason that the “Better Call Saul” would eventually wade into “Breaking Bad’s” timeline, though many fans expected a Easter Egg or two at the show’s conclusion.

Since its premiere, the show has played around with time. The opening moments of each season have featured a black-and-white vignette showing the fate of Saul Goodman after the events of “Breaking Bad,” where he was working at a Cinnabon in Omaha under the name “Gene.”

“Better Call Saul” returns for its fourth season on Aug. 6.