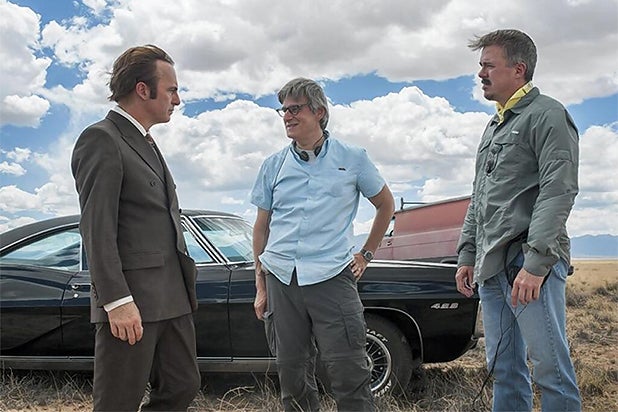 Fans hoping for a Walter White return may be in luck. “Better Call Saul” producers are making moves to ensure the possibility stays viable.

Executive producer Peter Gould tells The New York Daily News that the show will employ a flexible timeline that could be set before, during and after the events of “Breaking Bad” at various points. “One of the great things about having a timeline which is flexible is that perhaps some of it takes place before ‘Breaking Bad,’ during ‘Breaking Bad,’ and after ‘Breaking Bad’. That gives us the ability to bring back characters that were killed on ‘Breaking Bad.,'” Gould says. This includes, of course, Bryan Cranston‘s kingpin meth producer, who perished in the series finale.

However, Gould does not want to rely on bringing back the likes of Cranston or Aaron Paul‘s Jesse Pinkman to draw “Saul’s” audience. “We want to make a show that stands on it own, is its own story and is a brand extension. We think we have a story that is worth making. We could never dream of the kind of success that ‘Breaking Bad’ had and the love we got from the fans. But at a certain point you have to do the best job you can and tell the best story that entertains you, get a good response and hope people like it.”

“Better Call Saul” was recently confirmed for 2 seasons, with the series premiere delayed until 2015. AMC declined to comment on the report.