Showtime has added a third woman to its upcoming “Three Women” adaptation. Betty Gilpin will star opposite DeWanda Wise and Shailene Woodley, the network said Monday.

Gilpin will play Lina, a homemaker in Indiana who, after a decade in a passionless marriage, embarks on an affair that quickly becomes all-consuming and transforms her life.

The series, an adaptation of the bestseller by Lisa Taddeo, is described as an “intimate, haunting portrayal of American female desire” centered on three women “on a crash course to radically overturn their lives.” 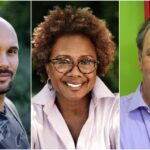 Woodley will star as Gia, a writer grieving the loss of her family who persuades the three women to tell her their stories. The course of her life is changed forever by her relationships with them. Wise will play Sloane, a “glamorous entrepreneur in a committed open marriage until two sexy new strangers threaten their aspirational love story.”

The drama is slated to begin production this fall for a premiere in 2022.

Gilpin is best known for starring on Netflix’s “GLOW” as Debbie “Liberty Bell” Eagan. More recently, Gilpin has appeared in the films “The Hunt,” “The Grudge,” “Coffee & Kareem” and “The Tomorrow War.”