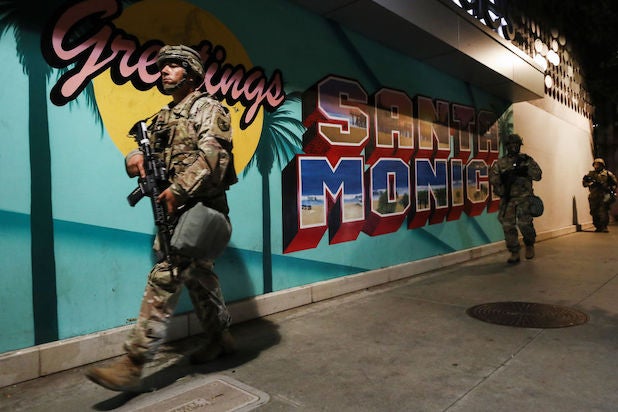 Beverly Hills and Santa Monica have continued early curfews for Tuesday, with the former beginning a citywide curfew at 1 p.m. and the latter beginning its curfew at 2 p.m.

Unlike Monday, the Big Blue Bus in Santa Monica is expected to run a regular weekday schedule but “may be detoured and/or delayed in areas where there are protests and demonstrations,” according to the BBB’s Twitter account.

Culver City has also announced a 4 p.m.-5:30 a.m. curfew, while Long Beach’s curfew begins at 6 p.m. Los Angeles County as a whole has a 6 p.m. curfew that lasts until 6 a.m. on Wednesday. West Hollywood’s curfew is set for 4 p.m. until sunrise Wednesday.

The city of Los Angeles has not yet announced a city-specific curfew but will be expected to follow the county’s curfew.

The curfews are in response to ongoing vandalism and looting that has occurred amid protests sparked by the killing of George Floyd. Though many protests have been peaceful, police have frequently clashed — violently — with protesters and have made hundreds of arrests.