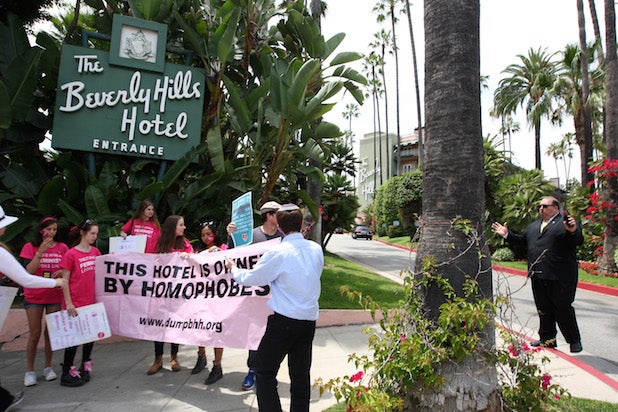 City leaders in celebrity-filled Beverly Hills voted on Tuesday to ban fracking, becoming the first municipality in California to prohibit the controversial technique for extracting natural gas and oil from underground rock deposits.

Environmentalists say chemicals used in the process pollute underground water supplies and cause other damage.

The unanimous vote by the Beverly Hills city council gives final approval to fracking ban, which was given the initial go-ahead by the panel last month. Council members, five of whom voted in favor of the ban, did not publicly discuss the measure on Tuesday. It will take effect on June 6.

The council also passed a resolution condemning the the Islamic state of Brunei for implementation of new sexist and homophobic laws, but did not call for a boycott of the Beverly Hills Hotel, which is owned by the sultan of Brunei.

Beverly Hills is one of the nation’s most affluent cities and is home to numerous luxury retailers, but it is not untouched by the oil industry. Oil drilling has for decades occurred at Beverly Hills High School, but the city council in 2011 voted to bring that to an end in 2016.

The move to ban fracking was undertaken in a similar spirit, city spokeswoman Therese Kosterman said in a phone interview before the final vote.

“It’s just the sense that industrial processes such as mining and oil drilling really is not appropriate in Beverly Hills,” Kosterman said.

No company had put forward any proposals to conduct fracking operations in Beverly Hills, she said. But the technique is already employed in nearby oil fields elsewhere in Los Angeles County.

The move by Beverly Hills officials follows last year’s approval by California lawmakers of the state’s first regulations on fracking. The law requires oil companies to obtain permits for fracking as well as acidizing, the use of hydrofluoric acid and other chemicals to dissolve shale rock.

Dave Quast, California director of energy in depth, a research and education program of the California Independent Petroleum Association, said in a statement that banning fracking threatens the state’s energy independence.

“A greater reliance on expensive imported fuel sources would put Southern California jobs at risk and could result in higher prices at the pump,” Quast said.

Don Drysdale, a spokesman for the California Department of Conservation, said in an email that no other community in the state has officially banned fracking.

Los Angeles officials are exploring a possible moratorium on fracking. In other parts of the country, New York state has instituted a moratorium on the technique, and Illinois last year adopted a strict set of regulations on it.