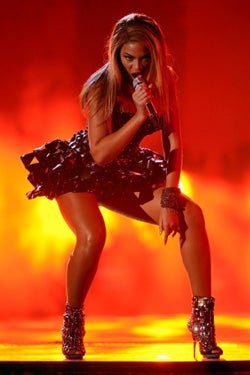 Beyoncé won six Grammys — the most by any woman in the 52-year history of the awards — including song of the year for “Single Ladies (Put A Ring On It),” while Swift won four.

But it was Swift’s  "Fearless" that took the evening’s highest honor: album of the year.

“I just keep thinking back to like when you’re in second grade, and you sing at your talent show for the first time. People joke around and they say, ‘Oh maybe we’ll see you at the Grammys someday.’ But that seems like an impossible dream,” Swift said. "I’m living an impossible dream."

Kings of Leon managed to upset Beyoncé and Swift in one category, winning the record of the year Grammy for their single, "Use Somebody."

Stephen Colbert, before presenting the award for song of the year to Beyoncé, pulled an iPad out of his jacket to read off the list of nominees. (Colbert won a Grammy for best comedy for his Christmas album, "A Colbert Christmas.")

Lady Gaga opened the broadcast with a glam-rock-opera performance of “Poker Face” followed by a duet of "Your Song" with Sir Elton John. Later, Beyoncé, who led all Grammy hopefuls with 10 nominations, performed a cover of Alanis Morissette’s "You Oughta Know."

Swift, sounding off-key, was joined by Stevie Nicks on stage for Fleetwood Mac’s "Rhiannon" and Swift’s Grammy-nominated "You Belong With Me."

The show, broadcast on CBS, wasn’t without its share of hitches. During Lil’ Wayne and Eminem’s performance of "Drop the World," the network opted to censor long sections of the song, resulting in a virtually-unlistenable airing.

The show, broadcast on CBS, wasn’t without its share of hitches. During Lil’ Wayne and Eminem’s performance of "Drop the World," the network opted to censor long sections of the song, resulting in a virtually-unlistenable airing on the East Coast.

For a list of Grammy Awards handed out during the broadcast, see below.

“Poker Face,” Lady Gaga
“Pretty Wings,” Maxwell
“Single Ladies (Put A Ring On It),” Beyoncé
“Use Somebody,” Kings Of Leon
”You Belong With Me,” Taylor Swift

Back From The Dead, Spinal Tap
A Colbert Christmas: The Greatest Gift Of All!, Stephen Colbert
Internet Leaks, "Weird Al" Yankovic
My Weakness Is Strong, Patton Oswalt
Suckin’ It For The Holidays, Kathy Griffin
Tall, Dark & Chicano, George Lopez

"Halo," Beyoncé
"I Gotta Feeling" The Black Eyed Peas
"Use Somebody," Kings of Leon
"Poker," Lady Gaga
"You Belong With Me," Taylor Swift

5 Ways to Save the Grammy Awards
The Grammys: Who Will Win … and Who Should!