Maybe we don’t need to wonder who “Becky with the good hair” is.

The day after Beyonce’s new visual album, “Lemonade,”  aired on HBO, fans are abuzz over the references to “Becky.” In the song titled “Apathy,” the singer offers a recommendation to the cheating man in her life — presumably her husband, the rapper Jay Z – singing, “He better call Becky with the good hair.”

Now “Becky” may have outed herself as Jay Z’s presumed other woman: fashion designer Rachel Roy.

Roy, ex-wife of Jay-Z’s former business partner Damon Dash, posted a response to the “good hair” comment, seemingly outing herself as the real Becky on her private Instagram page: 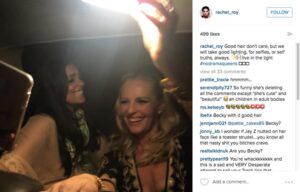 “Good hair don’t care,” she wrote, adding “but we will take good lighting, for selfies, or self truths, always. live in the light #nodramaqueens.” The designer also took to Twitter, and indicated Beyonce is publicly bullying her:

I respect love, marriages, families and strength. What shouldn’t be tolerated by anyone, no matter what, is bullying, of any kind.

Neil Diamond and Barbra Streisand, “You Don’t Bring Me Flowers” (1980) These two music icons brought the Grammy audience to their feet after finishing this duet, which the Recording Academy considers to be the second most memorable of all time.
View In Gallery
x