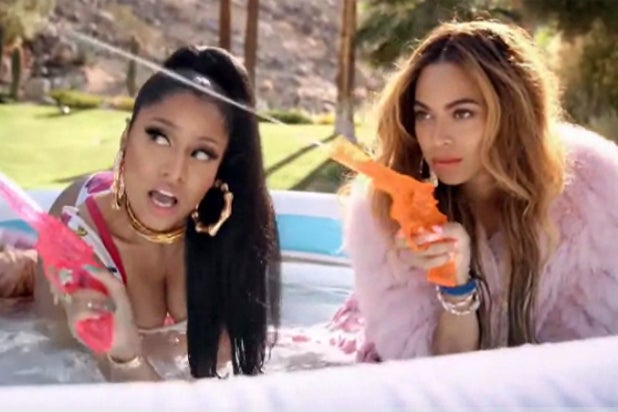 Beyoncé and Nicki Minaj set the Internet on fire Monday when they dropped the surprise music video for “Feeling Myself” exclusively on Tidal.

The single, a collaboration from Minaj’s 2014 album “The Pinkprint,” has been burning up the music charts and now it’s burning up social media as well, igniting trends on Facebook and Twitter.

The sexy footage features the ladies partying with friends in the desert at Coachella, twerking and showing off their curves in swimwear.

While initially posted to the subscription-only streaming service, the video was quickly ripped and shared on other sites.

Tidal launched last year and was bought by Jay Z in January for a reported $56 million. He relaunched the app  on March 30. Tidal is seen as a rival to Spotify, though it doesn’t have a free, ad-supported version. Standard definition streaming starts at $9.99 a month, and a high definition audio version goes for $19.99.

In recent months, the music service has suffered its share of rough patches, including the departure of CEO Andy Chen and layoffs. But on Saturday night, Jay delivered on his promise to offer special content to Tidal subscribers by performing two decades of his hits at a special “B-sides” concert that streamed live on the service.

Mrs. Jay Z and Minaj delivered on the promise again Monday, with the “Feeling Myself” video.

Watch the official teaser for the music video below.