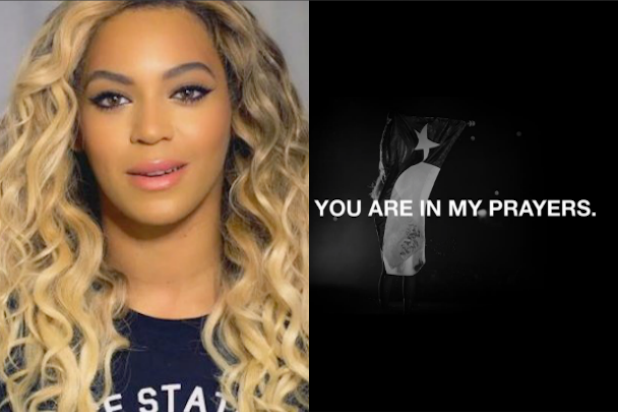 As Hurricane Harvey continues to cause destruction in Houston and other parts of Texas’ Gulf Coast, many noteworthy Texans have taken to social media to offer their prayers and financial support to victims.

Beyonce, perhaps one of the most famous Houston natives, posted a heartfelt message to those affected.

“Texas, you are in my prayers,” reads the singer’s post.

Was born in Harris county TX, know it!If you need help, in danger, will RT your address and location. ????#Harvey2017 #HarrisCounty #emergency

This is beyond devastating ????truly heartbroken for my home town. #staystrong #deepintheheart ???????? pic.twitter.com/2BQUMpGQS3

Houston has, and always will be the city that changed my LIFE! Everyone please send out prayers for H-Town! ????????

On Sunday, J.J. Watt, a defensive end for the Houston Texans, launched a flood relief campaign that, according to CBS Sports, has raised over $350,000 for those affected by Hurricane Harvey.

Recovery efforts from Hurricane Harvey will be massive.
We must come together to help rebuild our communities.https://t.co/SR6DmnNbyM pic.twitter.com/iiMsG2i4dl

Here is what a few other noteworthy people, both natives and non-natives of Texas, had to say:

Texas has been hit hard by Hurricane Harvey. I’m donating $100,000 to relief efforts and hope you will join me. https://t.co/oZvwtkp1iU pic.twitter.com/kDLNdj3WVi

Thank you to all the first responders and people helping each other out. That's what we do as Americans. Here's one way you can help now. https://t.co/iGfE8rAoAu

If you are in the path of #HurricaneHarvey, please be safe and know the whole country is thinking of you.

Beyonce and 5 Other Celebrity Wax Figures That Caused Meltdowns (Photos)

From Beyonce to Bieber, some wax is just too hot for fans to deal with

Beyonce fans freaked out this week after an image of the singer's wax figure showed up on social media, revealing a sculpture that appeared to look little like her. This isn't the first time that a wax figure has caused a stir. Read on for TheWrap's roundup.