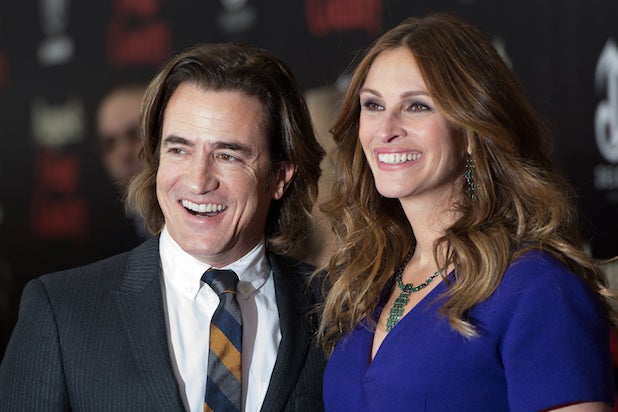 Dermot Mulroney and Julia Roberts might end up together after all. Fictionally speaking, that is. Roberts’ “My Best Friend’s Wedding” co-star Mulroney will join her on Amazon’s upcoming thriller series “Homecoming,” the streaming service announced Thursday.

Mulroney is set for a recurring guest star role as Anthony, Heidi’s (Roberts) boyfriend, who is eager to please, but a bit needy and grows increasingly frustrated with Heidi’s lack of attention to him and their relationship.

The pair are no strangers to playing lovers, starring in the 1997 rom-com as best friends who make a pact to marry if they both aren’t hitched by 28. That plan falls through when Mulroney’s character finds his future bride and Roberts’ character attempts to convince him she is really the one.

“Homecoming” — which hails from Universal Cable Productions (UCP) and Amazon Studios — is a psychological and political thriller that centers on a caseworker at a secret government facility and a soldier eager to rejoin civilian life. Based on Gimlet Media’s fictional podcast of the same name, the project marks Roberts first TV series regular role.

Bobby Cannavale and Stephan James will co-star in the 10-episode series. The script is penned by podcast creators Eli Horowitz and Micah Bloomberg and directed by Sam Esmail (“Mr. Robot”). Esmail will produce under his UCP deal and is reunited with his “Mr. Robot” crew on the series, including for director of photography Tod Campbell, production designer Anastasia White, and costume designer Catherine Marie Thomas.

Amazon Studios has the global rights to the series, which will premiere exclusively on Amazon Prime Video.

Mulroney’s recent projects include Max Martini’s “Will Gardner,” Nathan Frankowski’s “Chickasaw Rancher” and Scott Speer’s “I Still See You.” His film credits include “The Mountain Between Us,” “Sleepless,” “Dirty Grandpa,” “Truth” and “Jobs.” He has appeared on the TV series “New Girl,” “Shameless,” and Fox’s new comedy “LA to Vegas.”

In honor of Julia Roberts' 50th birthday, TheWrap takes a look at her evolution from just the "girl with the big smile" to one of the most respected and highly paid actors in Hollywood.