“Piracy is theft,” said Biden. “It is smash-and-grab, no different from smashing a window at Tiffany.” 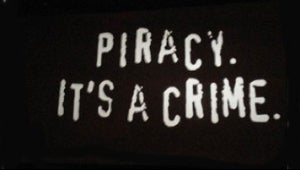 A new 61-page plan calls for increasing U.S. enforcement with a series of steps, including:

— Leading by example, seeing that the government and its contractors use products that are legal.

— Closing down websites that offer content illegally and spotlighting them when other governments don’t close them down.

— Improve sharing of information about any newly discovered technologies to block or defeat copyright protection. The report suggests that as media companies and marketers implement new technologies to protect movies and other intellectual property, they aren’t always explaining them sufficiently so the government can use them to authenticate content. Meanwhile, as the government finds new ways that counterfeiters are using to defeat protection schemes, those aren’t always being passed on to the industry. The report calls for more sharing both ways.

— Establish better procedures for reporting and following up on rights violations.

Biden noted that many movies are being distributed illegally on the streets of China even before they open in the United States. He promised to work with Espinel to implement parts of the report that would target those pirates.

Espinel said the strategy was developed from more than 1,600 suggestions and numerous meetings, including those with movie industry.

Along those lines, Espinel and Warner Bros. Entertainment chairman-CEO Barry M. Meyer are slated to testify about the enforcement plan to the Senate Judiciary Committee on Wednesday. But the Motion Picture Association of America and groups from other industries already have praised the plan in statements.

“This plan is an important step forward in combating intellectual property theft and protecting the millions of jobs and businesses that rely so heavily on copyrights, patents and trademarks and help drive the American economy," said Robert Pisano, president and interim CEO of the MPAA.

In its own statement, Disney said the plan demonstrated a commitment “to meaningful and effective enforcement of the intellectual property laws that drive creativity and innovation in this country. We hope will be the first step in a long-term strategy to protect jobs and encourage continued creativity.”

“The administration’s report is a welcome step toward reversing the dangerous trajectory that has endangered America's creative community,” he said in a statement. “Addressing the problem of intellectual property theft in a meaningful way is essential to enhancing our global competitiveness and protecting American innovation.”

Fox also praised the plan, saying in a statement that it "underscores the importance of copyright law as an effective means to protect our nation’s creative freedoms, and more importantly, lays out a clear plan to ensure today’s laws are better enforced.

"During a time of great innovation spurred by new technologies, it’s even more critical that agencies, law enforcement and officials have distinct direction to enable our creatives to continue bringing stories to screens of all sizes," Fox said.

"Such a focused and sustained effort can help save jobs and exports even as it nourishes the creation of artistic and technological content by the American people."

A joint statement from SAG, the DGA, AFTRA and IATSE also applauded the White House: “Internet theft is not a victimless crime as some would like policymakers to believe. It has a direct and very real impact on our members’ livelihoods, their pension and health plans, and their ability to work now and into the future. Internet theft has become a big money-making business that is, like other threats to cyber-security, a threat to the strength of this country and the well-being of its citizens …

“We commend White House Intellectual Property Coordinator Victoria Espinel for developing the initial roadmap on how the U.S. government will protect one of its greatest resources … We also value the clear vision and steadfast commitment of Vice President Joe Biden to shepherding this process from the start and to protecting hundreds of thousands of jobs across the country."