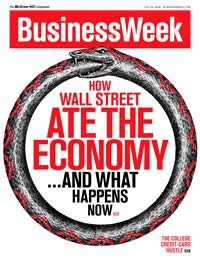 Final bids are due today in the sale of BusinessWeek magazine. Bruce Wasserstein — the executive who owns The Deal, New York magazine and a stake in Penton Media, and who had been considered the frontrunner — has decided not to enter a final bid, according to Jon Fine, BusinessWeek’s soon-to-be-going-on-sabbatical media columnist.

With Wasserstein out, that leaves Bloomberg LP, according to an M&A source, as the likely frontrunner, although “don’t rule out Joe Mansueto,” the billionaire owner of Fast Company and Inc. magazines. (Mansueto bought them in 2005 for $35 million plus assumption of debt.)

One of the problems, the suitors have found, is that the sound made by kicking the tires of the McGraw-Hill property isn’t exactly the New York Philharmonic. BusinessWeek lost at least $20 million in each of the last two years, and probably closer to $40 million.

And, of course, the rapid decline in print revenues. Advertising pages in BusinessWeek declined by 36.8 percent during the first half, according to the Publishers Information Bureau. They fell 34.3 percent during the second quarter.

Then there are stories like this one — published in Monday’s New York Times — that throw water on BusinessWeek’s website: “Though BusinessWeek.com attracts a lot of page views, 45 percent of those are from slide shows, which Web publishers consider a gimmicky way to increase hits. Only 16 percent of page views came from original articles for the six months ended in April. BusinessWeek.com also pulls in just $19.28 per thousand ad views, almost a quarter lower than what it was earning three years ago. And it sells only about 38 percent of the available ads, down from 79 percent in 2006.”

Fine, for what it’s worth, put together a handy primer for those following the sale.