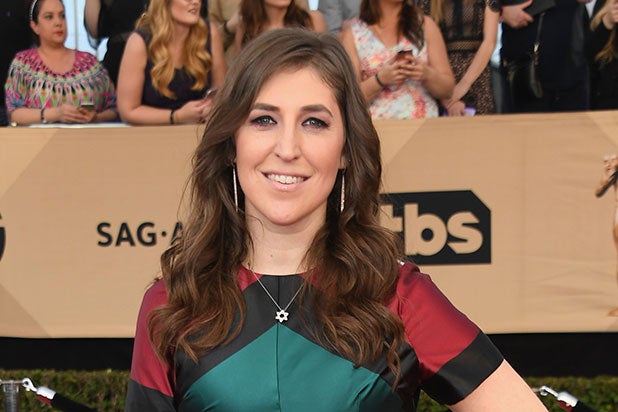 Sounds like Mayim Bialik has a case of wedding bell blues. Or at least wedding dress blues.

“The Big Bang Theory” star Bialik, who plays Amy on the CBS sitcom, took to the internet on Friday to inform fans that she’s “mopey” about trying on wedding dresses for the upcoming season finale of the series, which will feature her wedding to beau Sheldon (Jim Parsons).

“It’s no surprise that the Shamy wedding happens in May. Let’s talk about May, shall we? May — it’s the month of weddings. It’s the month of spring. The flowers are blooming, the birds are chirping. All is good on God’s green earth,” Bialik begins.

“In such a perfect month, with such a monumental episode on the horizon, why do I feel mopey?” the actress continued.

“Let’s play multiple choice. Is Mayim mopey a) because of Trump, b) because I always prefer winter over spring, or c) because trying on wedding dresses as Amy meant that real-life Mayim had to try on traditional wedding dresses, and that’s hard for me?” Bialik added.

Bialik added that Thursday’s episode, in which her character had to pick out a wedding dress, “brought up a lot of things that I personally am not comfortable with.”

Of course, she wasn’t done there.

Bialik announced in November 2012 that she was divorcing her husband of nine years, Mike Stone. The actress tweeted, “I’m beating the tabloids to it and posting this Divorce Statement.”

CBS announced Monday that Hamill would be among the guests featured on the Season 11 finale of “The Big Bang Theory,” which will feature the wedding of Amy (Bialik) and Sheldon (Jim Parsons).

The “Big Bang Theory” wedding episode will air May 10 at 8 p.m., with guest-stars including “Star Wars” icon Mark Hamill, Kathy Bates, magician Teller and Jerry O’Connell, among others.

In the meantime, watch Bialik say blech to the dress below.