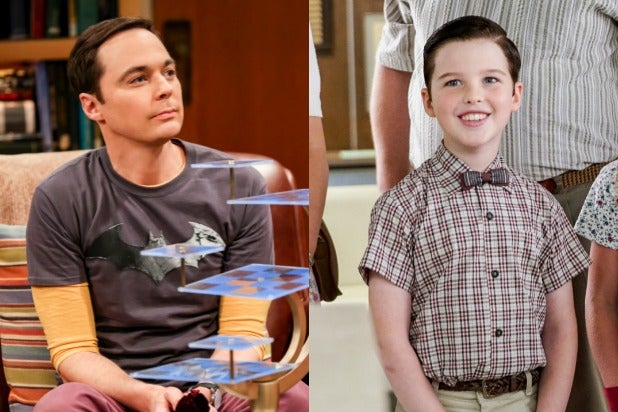 “Young Sheldon” will pay tribute to its parent series, “The Big Bang Theory,” with its Season 2 finale next week — which airs right after the “BBT’s” one-hour series finale — with another crossover.

The second season finale of “Young Sheldon,” which airs May 16 at 9 p.m. ET, will feature appearances by young versions of “BBT” staples Leonard, Penny, Howard, Raj, Amy and Bernadette, a CBS spokesperson tells TheWrap. No word yet on which actors will portray the tiny versions of the squad.

The crossover will play into the prequel’s storyline and also act as a tribute to the end of the long-running original series and the characters played by Johnny Galecki, Kaley Cuoco, Simon Helberg, Kunal Nayyar, Mayim Bialik and Melissa Rauch, according to the CBS rep.

While this is a very ambitious crossover, it’s not the first we’ve seen between the “Big Bang Theory” and “Young Sheldon.” Earlier this season, “Big Bang Theory” welcomed young Sheldon himself (Iain Armitage) on for a guest appearance, which he made via a VHS tape that adult Sheldon, played by Jim Parsons, was watching.

The “Big Bang Theory” series finale airs May 16 at 8/7 c and will be immediately followed by the Season 2 finale of “Young Sheldon” at 9/8c.