The “Big Brother” house evicted their next player this week and, as expected, the votes unanimously came down in the unfortunate favor of Whitney. This was largely thanks to the Royal Flush alliance, currently made up of Derek X., Christian, Kyland, Alyssa, Claire, Xavier, Sara Beth and Tiffany. But did Tiffany just set herself up to become a target?

It’s no secret that Tiffany is a smart player. She’s got plans and backup plans just about every week. And no one’s mad about it.

On Thursday, Tiffany revealed her latest plan to several people in the house, laying out ways to keep her alliances safe. Azah outright described it “an incredibly well thought out plan.” But what’s that they say about the best laid plans? 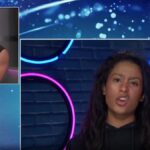 Also Read:
‘Big Brother': Hannah’s Goodbye Message for Brent Was as Savage as He Deserved (Video)

With Whitney’s exit, the Aces became a team of two, the Jokers and the Queens both stood tall at three, and the Kings were fully intact with all four members. And that was the whole concept of the Royal Flush alliance. It was the Kings, the Queens, and an ace up their sleeve. But after Thursday’s eviction, host Julie Chen Moonves announced to the houseguests that those teams are no more — now it’s every man and woman for him/herself.

Now obviously, the dissolution of teams doesn’t immediately mean the dissolution of alliances. But it does mean the players don’t have to worry so much about going against the wishes of someone who was on their team. It also means that should Claire or Kyland suddenly have problems with Tiffany — like say, if she were to go after Sara Beth and Kyland didn’t appreciate it — they could target her directly.

Granted, no one has explicit reason to target Tiffany yet. She’s played her game smart, and made good connections. And assuming her alliances hold up even now that teams are gone, she should be fine. But that master plan she laid out tonight? It had a lot of moving parts. It also indicated that she not only has the ability to think long-term, but do it well.

Right now, that plan still benefits multiple houseguests. But there’s no denying the threat someone with that skill poses. Tiffany may have just put a target on her back, solely for being good at the game.

Obviously, there’s no way to know with any certainty that Tiffany will be the next target. We’re just saying that this has definite problem-creating abilities, and we’ll be keeping a close eye on our girl.