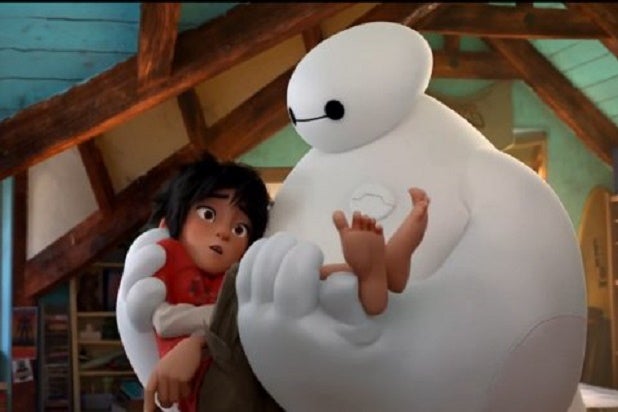 Disney Animation’s “Big Hero 6” blew past Christopher Nolan‘s “Interstellar” on Saturday to claim No. 1 in a battle of box-office behemoths this weekend.

The PG-rated “Big Hero 6” bounced to $56.2 million in its first three days, topping the $50 million that Paramount Picture’s space epic starring Matthew McConaughey soared to in its first weekend.

Driven by glowing reviews and strong word of mouth, the family crowd turned out in force for “Big Hero 6” on Saturday. The Marvel Comics-inspired tale of prodigy Hiro Hamada and his robot pal Baymax saw a huge surge in business and overhauled “Interstellar,” which had been in first after Friday, for the weekend victory.

This weekend marks just the fourth time that two movies have opened at $50 million or above. And in all the other matchups — “Monsters University” vs. “World War Z” in 2013, “Madagascar 3: Europe’s Most Wanted” vs. “Prometheus” in 2012 and “Wanted vs. WALL-E” in 2008 — the animated movie has come out on top, as it did this time. Both films represent high-stakes plays for their studios, with production budgets of $165 million.

The audience for “Big Hero 6” jumped 52 percent from Friday to Saturday, while that for “Interstellar” rose eight percent. Some of that is attributable to word of mouth — the animated movie received an “A” CinemaScore compared to the “B+” that audiences gave “Interstellar.” But most of the surge can be attributed to the kiddie crowd.

Families made up 72 percent of the “Big Hero 6” audience, which was split evenly on gender lines, and 36 percent was kids 12 and under. “Big Hero” — directed by Don Hall and Chris Williams — also got a big boost from 3D. About 3,100 of the market-high 3,761 theaters showing the film were 3D, and those screens provided 29 percent of the opening weekend grosses.

“The Disney Animation brand, which is undergoing a creative renaissance under John Lasseter and Ed Catmull, means more than it ever has,” Disney’s distribution chief Dave Hollis told TheWrap. “This weekend is evidence of that – and a really great movie.”

“Big Hero 6” is the latest in a run of hits for the studio that includes “Tangled,” Wreck-It Ralph” and most recently, “Frozen,” the highest-grossing animated film of all time. With its CinemaScore, a 91 percent “fresh” rating on Rotten Tomatoes and a largely clear field in terms of family film competition, “Big Hero” is positioned to play well through the Thanksgiving holiday.

Giant screens were a huge part of the story for “Interstellar,” which was in 3,561 theaters.The $13.4 million that was generated from 368 IMAX screens accounted for a record 26 percent of the grosses — an eye-popping $36,000 per-screen average, and 19 of the top 20 locations were IMAX. Other premium large-format screens represented another 10.5 percent of the weekend haul.

“It’s no small feat to have two original movies play as strongly as these did in November, so we’re very happy with this start,” Paramount’s President of Worldwide Distribution and Marketing Megan Colligan said.

“Interstellar” played slightly male (52 percent) and older, with 75 percent of the audience 25 years old or above. The “B+” CinemaScore from audiences was in line with the critics, who have it at a pretty good 73 percent positive on Rotten Tomatoes.

“Interstellar,” which co-stars Anne Hathaway, Jessica Chastain and Michael Caine, began its run on Wednesday and Thursday with special IMAX and 70 and 35 millimeter film showings in 250 theaters, which brought in a little more than $2 million.

The strong start and older skew were positive signs for Paramount as it looks to the weeks leading up to the holidays.

“The campaign for this film was always seen as a marathon, and there are elements of the marketing that will be kicking in only now,” Colligan said. “We have Matthew [McConaughey] and Mackenzie Foy, who plays his daughter, on ‘Good Morning America,’ tomorrow for example. We think the next few weekends will feel a lot like openings for a lot of people.”

The No. 1 movie for the past two weekends, Universal’s teen horror thriller “Ouija” was battling “Gone Girl” for third, with both at around $6 million. But the two top films dominated, with each earning more than the rest of the top ten combined.