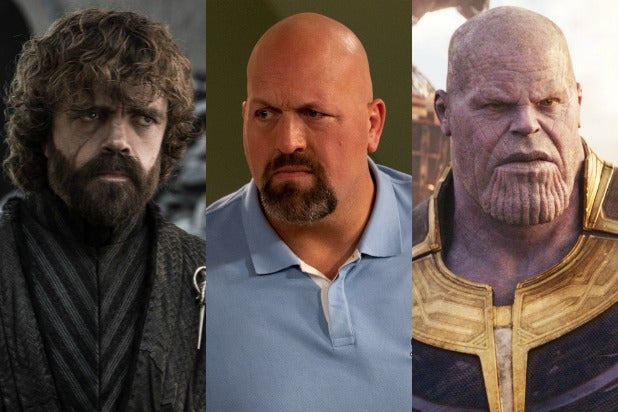 WWE wrestler Paul “The Big Show” Wight’s body of work in Hollywood is growing almost as fast as his actual body did as a young man.

With all the new opportunities, including a recent run on Syfy’s “Happy!” and now his own Netflix family sitcom “The Big Show Show,” Wight’s had to accelerate the journey from crafting a pro-wrestling character to actually inhabiting roles. (OK, so “The Big Show Show” is essentially biographical.)

He’s had some good teachers — including the indirect ones.

“As an actor, I look at someone like Peter Dinklage, which you’d think is the opposite end of the spectrum,” Wight, who referred to Dinklage as his “hero,” told TheWrap. “But no, because Peter Dinklage is such a good actor, he is able to take parts that originally weren’t written for a little person and a smaller person and he’s transcended that so that it doesn’t matter. You see how he interacts with his environment, but at the same time, it adds flavor to the dialogue that’s written. So if I can do that as a big guy and come to change the perception a little bit that it’s OK for big guys to actually have talent and actually be able to tell stories, that’s what I’m trying to do.”

Also Read: WWE Superstar The Big Show Knows He's an 'Attraction' at This Point, and He's Fine With That

Of course, Wight knows that being 7-feet-tall, 338 pounds (which is major shrinkage from his days as a wrestling champion) “limits a lot of your options” — as he put it — in this town.

“It’s tough to convince people [otherwise], especially because Hollywood is more of a money business than pro wrestling,” Wight said. “If they’re going to invest millions of dollars into a project to put this movie out, they’re going to invest in somebody who can put people in seats or are going to [make them want to] buy it or who people are going to buy the downloads [for]. That’s who they are investing in to pull this part off. And it’s not one of those things like, ‘I have a dream!’ They don’t give two craps about your dream. They want to make sure that the investment is good.”

One way for a giant to pay dividends in a way others can’t is by making set dressing look like miniatures.

“I pick up a can of soda, three fingers covers the whole can — you know what I mean?” he continued. “So that as a viewer watching a scene, you’re going to be awed by that, but at the same time, delivering the dialogue, I can change that perception where eventually, the way I interact with my background tends to not be such a big factor. It’s there, but it’s not the only thing they’re seeing, you don’t have to play to it.”

On the big side of the spectrum, Show took lessons from Josh Brolin as Thanos in the “Avengers” movies.

“Thanos I thought was great, because when you’re that big and you’re that powerful, you’re never loud. You don’t growl, you don’t have to because you know how powerful you are,” Wight said. “That’s one of the biggest things for a lot of the stuff I’ve done, ‘Oh, can you growl here?’ I’m like, ‘Yeah, but, I wouldn’t.’ Because when you’re this big, you don’t have to run around. Small guys have to run around and prove how big they are. Big guys don’t have to. Trying to keep that authenticity.”

“But I love Josh Brolin’s performance in that Marvel ‘Infinity War’ stuff because I just thought he nailed it right on the head. Because if you’re Thanos, what do you have to stress about?”

(Thanos probably should have stressed about Iron Man figuring out time travel from his lake house.)

Season 1 of “The Big Show Show” is currently streaming on Netflix.