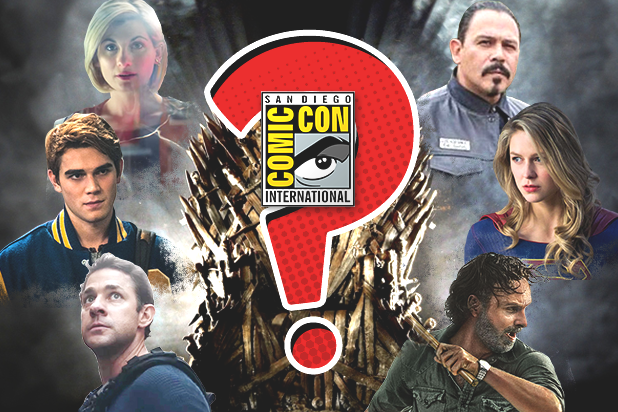 When a network plays the San Diego Comic-Con version of the game of thrones, it’s not exactly a “you win or you die” situation, since everyone gets a huge welcome from their fans. But thanks to two extremely popular shows, one network often gets the lion’s share of SDCC hype, and that network — HBO — is staying home this year.

Last month, the premium cabler announced its shows “Game of Thrones” and “Westworld” will not have panels or public activations at the convention this week, citing production schedules that conflict with the multi-day pop culture event. Their only appearance, as TheWrap exclusively reported, will be at the extremely invitation-only Entertainment Weekly party Saturday night, meaning the Comic-Con hoi polloi won’t see them at all.

But while it’s bad news for fans of the multiple Emmy-nominated shows, it’s good news for networks looking to seize the TV Iron Throne left empty by HBO’s absence. The only question being: who will grab it?

The obvious answer is AMC, long a heavy-hitter in the con’s largest venue, Hall H. The network is bringing not just its “Walking Dead” franchise series — happening following the news “TWD” star Andrew Lincoln is exiting during the next season — and “Preacher,” but also “Better Call Saul” and a special “Breaking Bad” 10th anniversary panel to Hall H.

And if you wanna count sister network BBC America toward AMC’s total, then you have the first appearance of the Jodie Whittaker-led “Doctor Who” — an experience many in the Whoverse would give up their sonic screwdriver to attend.

That lineup, combined with fan-favorite Yvette Nicole Brown taking over as host on the “Walking Dead” and “Fear the Walking Dead” panels — and the drama surrounding why she’s hosting them — should mount a worthy challenge for the title.

However, there are still a few dark dragons that could win this race.

Also Read: From 'Buffy' to 'Battlestar Galactica,' 17 TV Shows That Live on in Comics (Photos)

FX stands a fighting chance of freezing all other networks’ motor functions, thanks to all the hype surrounding its eagerly-anticipated “Sons of Anarchy” spinoff, “Mayans MC,” which makes its Comic-Con debut in the Hall H spot previously occupied by “Sons.” And though “Legion” and “Archer” aren’t smash hits, they are critically-acclaimed series with cult followings — a combo that jives well with con-goers. Though the basic cable channel has one very notable absence this year: Ryan Murphy’s “American Horror Story.”

Meanwhile, The CW leads the pack in quantity, with superhero hits “Arrow,” “Black Lightning,” “DC Legends of Tomorrow,” “The Flash” and “Supergirl,” the new “Vampire Diaries” and “The Originals” spinoff “Legacies,” long-time con visitor “Supernatural,” and a first look at the network’s “Charmed” reboot, all in the con’s second-biggest venue, Ballroom 20. And “Riverdale”s graduation to Hall H is a pretty big flex for the network.

Amazon is all about its new action adaptation “Tom Clancy’s Jack Ryan,” which will be previewed during a panel of Amazon Prime Original Series creators in Ballroom 20. These include “Jack Ryan” showrunner Carlton Cuse, “The Tick” creator Ben Edlund, “Homecoming” director Sam Esmail, author Neil Gaiman, the creator/writer/showrunner of “Good Omens,” “Lore” executive producer Gale Anne Hurd, and “The Expanse” showrunner Naren Shankar. (That last one is a big deal for fans of the Syfy series who saw it revived by the streamer after cancellation this spring.)

Netflix is taking something of a breather this year, with “Stranger Things 3” a no-show and “Iron Fist” representing as the streamer’s sole Marvel series at the con. However, “Simpsons” creator Matt Groening is shoring up the roster with a preview of his new series “Disenchantment,” and DreamWorks will be repping the next season of “Voltron Legendary Defender.” “Lucifer” also might show up, as the series’ co-showrunner Ildy Modrovich mentioned on Twitter last month the show — which Netflix resurrected for a fourth season after its Fox cancellation — would be making some sort of appearance. However, events kick-off tonight and it’s still unclear in what manner the Tom Ellis-led drama will be presented.

Fox’s 2018 Comic-Con block will be led by the world premiere screening and Q&A for its new thriller series “The Passage,” with the rest of the network’s presentation focusing on its animated shows (“The Simpsons,” “Bob’s Burgers,” “Family Guy,” and “American Dad!”) and Season 2 panels for “The Gifted” and Seth MacFarlane’s “The Orville.”

Then there are a few outliers who could pose a bit of a threat: Hulu’s world premiere of Stephen King-universe series, “Castle Rock”; CBS All-Access’ takeover of Hall H when “Star Trek: Discovery” lands on Friday; Syfy’s “Krypton” panel and a first look at its George R.R. Martin series, “Nightflyers”; NBC’s screening of new drama”Manifest,” along with cast/creator panels for “The Good Place” and network-hopping “Brooklyn Nine-Nine”; and the DC Universe digital streaming service’s presentation of “Young Justice: Outsiders.”

But take care, contenders: While the TV crown may be up for grabs this year, the final season of “Game of Thrones” is due next year, and “Westworld’ Season 3 is likely to be in-production by then. In other words, winter is coming, and HBO is probably coming with it.