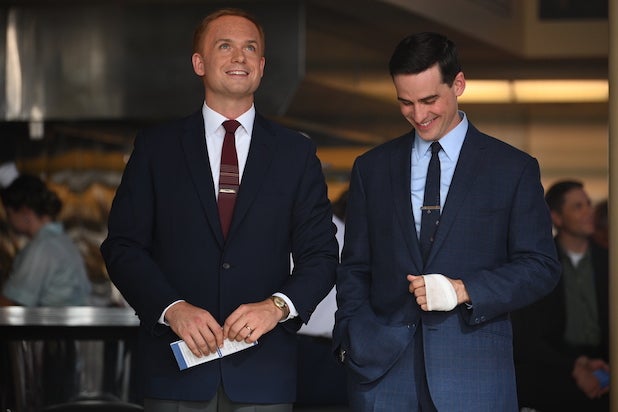 In Disney+’s limited series “The Right Stuff,” NASA pulls in the very best test pilots from each branch of the armed forces in the late 1950s in an effort to select who will be the first American to go into outer space. Eventually, the upstart program narrows down its list to seven men, a group that would be dubbed the Mercury 7. The search started with a hell of a lot more than seven, however — and they all had one thing in common.

In Episode 1, titled “Sierra Hotel,” we follow Gordon Cooper (a.k.a. Gordo, played by Colin O’Donoghue) to a lobby desk at a hotel near Langley Air Force Base in Hampton, Virginia. There, he checks in under a pseudonym, “Bill Baker.”

“Not only do you all have the same name, you all look the same too,” the front desk clerk says, producing a sign-in book full of “Bill Baker” signatures.

We then see all the faux Bill Bakers mingling around at a cocktail party in the background. Yeah, these test pilots all look the same.

But did the “Bill Baker” x 100 thing really happen? Or was it simply a device used in the series for dramatic — and humorous — effect? A little bit of both, it turns out.

“The astronaut candidates did receive Top Secret orders to appear at a mysterious meeting to learn about the Mercury Project, but this took place at the Pentagon, and there were no aliases,” the production exec said. “Then, when NASA recruited the next round of astronauts for Gemini, they did have them check in to the Rice Hotel under the alias ‘Max Peck.'”

The first two episodes of “The Right Stuff” debuted Friday on Disney+. The next six episodes will roll out weekly, one at a time.