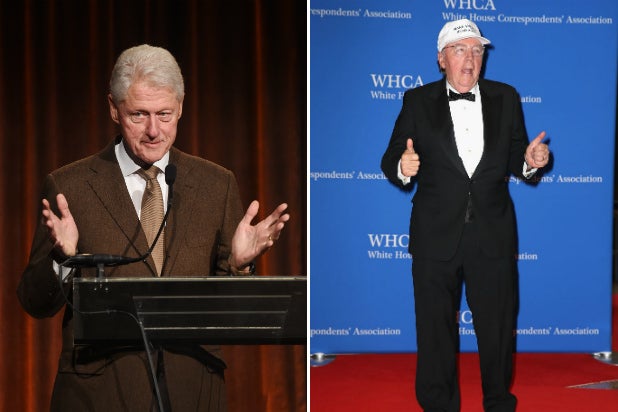 Former President Bill Clinton is using his experience to journey into a new venture: novel writing.

Publishers Knopf and Doubleday jointly announced Monday that the 42nd U.S. president will be teaming up with best-selling thriller novelist James Patterson to co-author “The President Is Missing,” set to be released in June 2018, according to the Associated Press.

Plot details are scarce (we don’t know if the president will be based on anybody in particular, for example), but in a statement, both authors acknowledge that Clinton’s past experience in the White House informed the book.

In fact, the publisher said in a statement that Clinton’s experience helped them created “a unique amalgam of intrigue, suspense and behind-the-scenes global drama from the highest corridors of power. It will be informed by details that only a president can know.”

“Working with President Clinton has been the highlight of my career, and having access to his firsthand experience has uniquely informed the writing of this novel,” Patterson said in a statement. “I’m a storyteller, and President Clinton’s insight has allowed us to tell a really interesting one. It’s a rare combination — readers will be drawn to the suspense, of course, but they’ll also be given an inside look into what it’s like to be president.”

Clinton said likewise, adding that working on a story about a sitting President was “a lot of fun.”

“And working with Jim has been terrific. I’ve been a fan of his for a very long time,” he added.

Patterson is one of the most prolific thriller authors on the market. He just released “16th Seduction,” which is another installment in his “Women’s Murder Club” series. He’s also recently expanded into kids’ fiction and humor with “Penguins of America,” which he wrote with his son Jack Patterson.

As for former U.S. presidents, novel writing is a bit more uncommon.

Jimmy wrote the historical novel “The Hornet’s Nest” in 2003, but for the most part, presidents have stuck to nonfiction. Clinton, for example, has four books under his name: the memoir “My Life,” along with “Back to Work: Why We Need Smart Government for a Strong Economy,” “Between Hope and History” and “Giving: How Each of Us Can Change the World.”