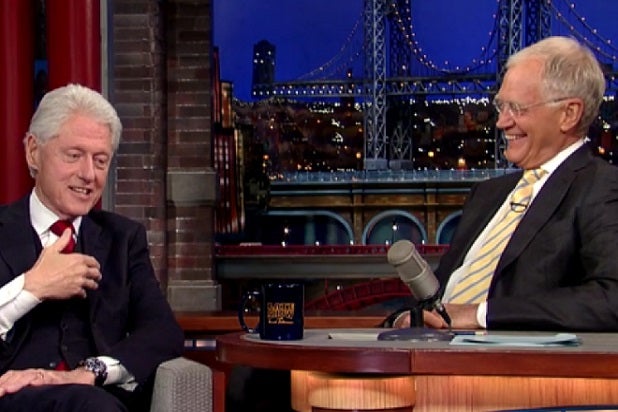 President Bill Clinton appears on “Late Show With David Letterman” on Tuesday night to answer the question on everyone’s mind: Does he plan another stint in the White House?

With Clinton’s wife Hillary mounting a bid for the presidency in the 2016 election, Letterman asked her former chief executive, “What are the chances of you moving back to 1600 Pennsylvania Avenue?”

Clinton’s answer befitted a man who’s spent decades in politics: First, he noted, his spouse must win the nomination. Then, she must win the election.

“If she wins the election, the chances are 100 percent that I’ll move back … by the way, if I’m asked,” Clinton hedged.

Clinton added, “It would be a good thing for America if she wins; I hope she does.”

“Late Show With David Letterman” airs at 11.35 p.m. on CBS. Watch the exchange below.