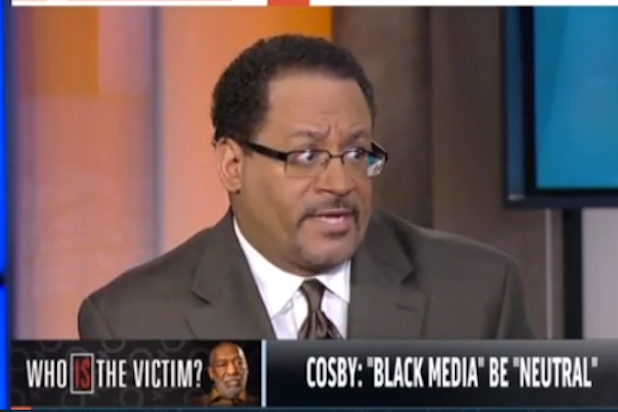 Bill Cosby‘s attorney issued a new statement on Thursday that took aim at MSNBC contributor Michael Eric Dyson, who had accused the embattled comedian on Wednesday of “raping” the black community.

“Michael Eric Dyson, who has been a persistent critic of Mr. Cosby’s call for responsibility in the African-American community, has stated that Mr. Cosby’s request for neutrality is part of what he calls Mr. Cosby’s ‘rape [of the ] entire black community.’ Mr. Cosby understands that Mr. Dyson does not agree with Mr. Cosby’s views, but such mean-spirited and reckless rhetoric cannot go unchallenged by responsible people and journalists,” Schmitt’s statement read.

On Wednesday’s “Now With Alex Wagner,” Dyson commented on Cosby’s call over the weekend for black media to remain “neutral” in covering the mounting sexual allegations against the comedian.

“The very kind of man who would rape women, allegedly, is the same kind of man who will rape an entire black community, poor black people who are vulnerable before him, using his powerful foot to clump down on their necks,” Dyson Said.

The rest of Schmitt’s statement sought to further explain Cosby’s comments about black media’s coverage of the allegations against him.

See video: Jon Stewart Likens Congress to Bill Cosby: They Both Slip Toxic Things in While No One Is Looking

“To be clear, Mr. Cosby did not ask for special treatment from the African-American media,” the statement read. “To the contrary, he asked that they adhere to journalistic standards and approach the story in a neutral manner – without a predisposition on either side of the story. It is of course what we would expect of all media. Those words, which are clear on their face and with which any fair-minded person would have to agree, have now been the source of even greater criticism of Mr. Cosby.”

Cosby — who until this past weekend had stayed silent on the sexual assault accusations against him, allowing his lawyers to issue statements on his behalf — spoke for a short time on Saturday to Stacy Brown, a freelance writer from the New York Post who also writes for African-American media outlets.

“Let me say this,” Cosby told Brown. “I only expect the black media to uphold the standards of excellence in journalism and when you do that you have to go in with a neutral mind.”

Also read: Bill Cosby Accuser Fires Back at Camille Cosby: He’s ‘Not the Man I Thought I Knew’

Cosby’s attorney’s has since said that the comedian did not know he was being recorded and did not know that the reporter was calling on behalf of the New York Post as opposed to an African-American media agency.

Brown did not deny any part of the attorney’s statement.