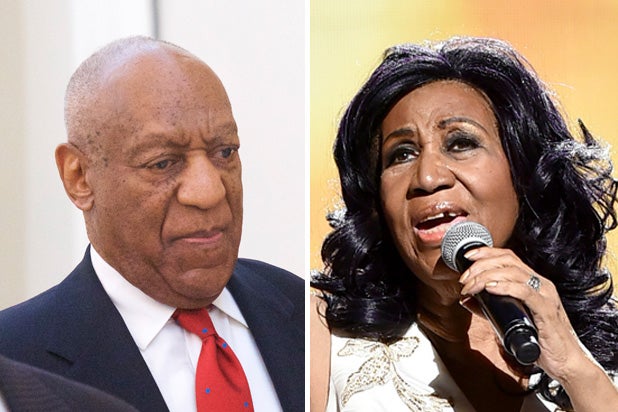 Disgraced comedy star Bill Cosby faced online backlash on Thursday after paying tribute to the late Aretha Franklin by remembering the Queen of Soul for her work on his “The Cosby Show” spinoff “A Different World.”

“Are you tweeting from jail?” one commenter asked about Cosby’s tweeted remembrance, while another snarked: “Wifi must be good in cellblock c.”

Cosby, who was convicted in April on three counts of aggravated assault, has remained mostly out of the spotlight in recent months — though his tweet about Franklin sparked an outcry.

“Aretha Franklin – I want to thank her for her wonderful voice singing the theme song of ‘A Different World,'” Cosby tweeted. “She made a big, strong positive impact on that series.  I am playing a cut from her CD – the title of the song is ‘Wholy Holy’ – and she’s live in a church.  Bon Voyage…..”

Franklin died Thursday in Detroit at the age of 76 after a long battle with diabetes and other physical ailments. During her career, Franklin won 18 Grammys, including a lifetime achievement award in 1994. She was also the first woman to be inducted into the Rock and Roll Hall of Fame.

Cosby is currently out on $1 million bond awaiting sentencing after his April conviction for charges stemming from accusations by former Temple University employee Andrea Constand.

The disgraced star created “A Different World,” which aired for six seasons on NBC from September 24, 1987 to July 9, 1993. It followed Denise Huxtable (Lisa Bonet) and students at a fictional historical black college in Virginia.

Franklin sang the theme song for seasons two to five.

Aretha Franklin – I want to thank her for her wonderful voice singing the theme song of “A Different World.” She made a big, strong positive impact on that series.