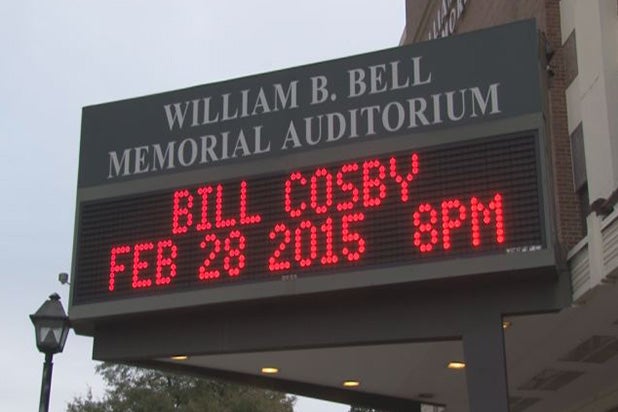 More than 30 women have accused the TV legend of rape or sexual assault, often after drugging their drinks. And his shows have been canceled in many parts of the country. But that was apparently of little concern to fans who came out to see the comedian’s standup routine at Augusta’s William B. Bell Memorial Auditorium.

“The show was great. He was well received,” an attendee who did not want to be identified told TheWrap Sunday, adding that Cosby “joked about marriage, family, religion, aging,” and the crowd loved him.

There were “no negative outbursts” during the show and one person even yelled to Cosby “Puerto Rico supports you,” the attendee said.

Since November, about three dozen women have come forward to accuse Cosby of sexual misconduct. The comedian has denied the allegations, and in their wake his attorney Martin Singer said, “The new, never-before-heard claims from women who have come forward in the past two weeks with unsubstantiated, fantastical stories about things they say occurred 30, 40 or even 50 years ago have escalated far past the point of absurdity.”

But the allegations keep coming. The most recent woman to speak out was former aspiring actress and model Heidi Thomas, who offered graphic details of her alleged encounter with Cosby. In an interview that aired on Feb. 24, she told CNN that the former “Cosby Show” star took advantage of her in 1984, in Reno, Nevada.

In an account that has become all too familiar, Thomas claimed she was instructed by her agency to visit Cosby, who was performing at Harrah’s Hotel and Casino in Reno, so he could give her pointers on acting. According to Thomas, she performed a monologue for Cosby, after which he told her to do a read as a drunk person.

“How are you ever going play an intoxicated person… if you’ve never been drunk?” Cosby asked, then gave her a glass of Chablis, according to her explanation. That’s when she says things grew “foggy.”

According to Thomas, she woke up to find Cosby in bed with her. The comedian was naked and “forcing himself in my mouth,” Thomas claimed.

Cosby’s career has taken a number of hits since the allegations began surfacing. NBC decided to ax a comedy series that it was developing for the comedian to star in, while Netflix ditched a comedy special starring Cosby that had been scheduled to run over the Thanksgiving holiday.

The comedian has also canceled or postponed a long list of standup performances since the recent wave of allegations surfaced.