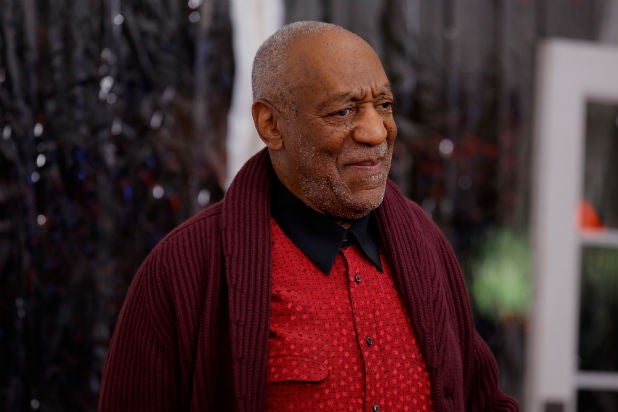 UPDATE, Saturday at 1:42 p.m: Cosby’s show in Houston set for Jan. 24 at Jones Hall has been canceled “by mutual agreement with the intent to reschedule in a future season,” according to a statement from the Symphony. No new date has been announced.

The growing number of women accusing Bill Cosby of sexually assaulting them has led several venues scheduled to host the comedian to reconsider having him headline at their theaters. Many of Cosby’s upcoming appearances have been canceled across the country. Yet despite protests and petitions, other venues have kept Cosby’s shows on their schedules, including performances in Florida and the Bahamas earlier this month.

In addition to having the plug pulled on his live performances, Cosby has also seen television projects canceled amid the multiple rape allegations. As TheWrap previously reported, NBC decided not to move forward with a proposed series that would have starred the comedian and former star of “The Cosby Show.” Netflix also pulled its planned comedy special with Cosby as the controversy continued to grow. TV Land announced they would halt airing all reruns of “The Cosby Show.”

Cosby’s attorney, Marty Singer, calls the claims made by accusers, “past the point of absurdity.”

“These brand new claims about alleged decades-old events are becoming increasingly ridiculous, and it is completely illogical that so many people would have said nothing, done nothing, and made no reports to law enforcement or asserted civil claims if they thought they had been assaulted over a span of so many years,” Singer said. “Lawsuits are filed against people in the public eye every day. There has never been a shortage of lawyers willing to represent people with claims against rich, powerful men, so it makes no sense that not one of these new women who just came forward for the first time now ever asserted a legal claim back at the time they allege they had been sexually assaulted.”

Singer continued, saying: “This situation is an unprecedented example of the media’s breakneck rush to run stories without any corroboration or adherence to traditional journalistic standards. Over and over again, we have refuted these new unsubstantiated stories with documentary evidence, only to have a new uncorroborated story crop up out of the woodwork. When will it end?”

Cosby is currently appearing across North America in a 77 show tour that runs into 2015. TheWrap has compiled a list of shows that occurred or are set to occur following Cosby being accused of sexual assault.

Who has called off Cosby’s scheduled appearances and who is sticking by him? See below.

Nov. 20 – Paradise Island, Bahamas – Atlantis Resort
Cosby took the stage as scheduled for a 90-minute set that included bits about growing up in Philadelphia and jokes about the Bahamas, but he made no mention of the many rape allegations.

Nov. 21 – Melbourne, Fla. – Maxwell C. King Center for the Performing Arts
The embattled comedian received a standing ovation from the sold-out crowd. As was the case at his show the night before, Cosby did not address the sexual assault accusations in his act. After the show however, he told reporters, “I know people are tired of me not saying anything, but a guy doesn’t have to answer to innuendos.”

Nov. 28 – Las Vegas, NV – Treasure Island
As TheWrap previously reported, Cosby’s show on The Strip was canceled “by mutual agreement,” with all tickets intended to be fully refunded.

Nov. 29 – Yakima, Wash. – Capitol Theatre
Cosby’s show has officially been canceled but according to a Yakima Herald report, theater reps declined to clarify if they or the comedian made the decision. “I have absolutely nothing to say outside of the press release we sent out today,” Steve Caffery said on Monday.

Dec. 6 – Tarrytown, N.Y. – Tarrytown Music Hall
Dozens planned to protest outside of the theater on the night of Cosby’s back-to-back shows in Tarrytown and many ticket holders reportedly asked for refunds from the Music Hall. Two days before his scheduled appearance, Cosby, in consultation with the promoter, agreed to postpone the performances to a later date, according to the venue.

Jan. 7 – Kitchener, Ont. – Centre In the Square
On Monday, the venue posted an explanation for not canceling the Cosby show, saying: “This is a rental show and CITS is contractually obligated to move forward with the show unless it is cancelled by the external promoter. Our response is not complacent or an attempt to pass on the blame. While we may personally share concerns raised by the community, if The Centre forces a cancellation of this rental show it isn’t simply a situation of giving back the rent. As a result of breaking our contract for this show, The Centre would need to pay any guarantee fee contracted to Mr. Cosby and compensate the promoter for any losses from box office and show expenses. The Centre would also need to refund patrons as the promoter would not be responsible for bearing these costs in this scenario. For these reasons we will continue to discuss options with the promoter, sharing the community concerns with them.”

Jan. 8 – London, Ont. – Budweiser Gardens
Despite a women’s group calling for a boycott of Cosby’s upcoming comedy show, the theater has no plans to cancel his appearance.

Jan. 16 – Pueblo, Colo. – Memorial Hall
Tickets to Cosby’s show are still on sale and the performance is expected to go on as scheduled.

Jan. 18 – Turlock, Calif. – Turlock Community Theatre
Cosby’s show is currently sold out and will remain on the theater’s schedule.

Jan. 23 – Durant, Okla. – Choctaw Casino & Resort
Cosby’s show has been canceled, with a representative from the theater saying in a statement that they felt this was the best decision at this time. Patrons who purchased tickets will receive a full refund.

Jan. 24 – Houston, Texas – Jones Hall
Cosby’s show, part of the Houston Symphony 2014-15 season, has been canceled “by mutual agreement with the intent to reschedule in a future season,” according to a statement from the Symphony. No new date has been announced.

Feb. 8 – Boston, Mass. – Wilbur Theatre
A promoter for the two shows in Boston has refused to comment and for now, Cosby’s appearance is going forward as scheduled.

Feb. 14 – Reno, Nev. – Silver Legacy Casino
Cosby’s Valentine’s Day show has been put on indefinite hold, according to representative from the theater. Silver Legacy says Cosby notified them that his show was to be postponed but gave no reason as to why the performance needed to be delayed. A new date has not been named.

Feb. 15 – Tucson, Ariz. – Desert Diamond Casino
The venue gave no explanation in their statement announcing the show’s cancellation but will offer refunds to those who bought tickets.

Feb. 20 – Florence, S.C. – Florence Civic Center
Cosby’s show in South Carolina has been indefinitely postponed. Full refunds are being given to ticket holders.

Apr. 12 – Green Bay, Wis. – Weidner Center
Officials at the University of Wisconsin-Green Bay canceled Cosby’s show and have no plans to reschedule it. Those who purchased tickets will receive a full refund.

Apr. 18 – Tacoma, Wash. – Pantages Theatre
Cosby’s show has been canceled. “This decision is not intended to pass judgment on Mr. Cosby – that is not the business of the Broadway Center,” David Fischer, the Broadway Center’s Executive Director, said in a statement.

May 2 – Atlanta, Ga. – Cobb Energy Performing Arts Centre
Despite an online petition to stop Cosby’s performance, the show is still set to take place as scheduled.