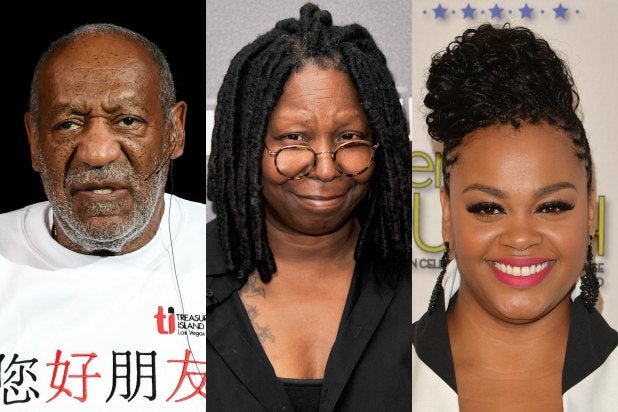 Bill Cosby broke his silence ever so slightly on Wednesday over the sexual assault allegations he currently faces from several women. The comedian tweeted to both Whoopi Goldberg and singer Jill Scott, thanking them without any explanation for his gratitude.

“The View” co-host has on several episodes sided with Cosby, going so far as to question why it took so long for many of his accusers to come forward.

“Don’t you do a kit when you say someone has raped you?” Goldberg asked of alleged victim Barbara Bowman. In a later episode, Goldberg stated: “People jump on the bandwagon, I’m going to wait.”

Earlier in the week, Scott told her followers on Twitter that she would not “condemn” Cosby “without proof.”

“I’m not dismissing. I’m just not quick to jump at the bit,” Scott said. “Sides with Mr. Cosby? No. I side with substantiated proof when media/society is attempting to destroy a magnificent Legacy.”

Scott continued, tweeting: “Rape is a despicable, cowardly crime. If you’ve been raped — plz do NOT shower, go to police IMMEDIATELY, have a rap kit done. GET EVIDENCE.”

Also read: Bill Cosby Resigns From Temple University Board of Trustees In Wake of Scandal

Just this week, Cosby was slapped with a lawsuit for alleged sexual battery by a woman who says he assaulted her in 1974 when she was just 15.

Cosby’s attorney Marty Singer has not addressed this latest allegation, but in an earlier statement regarding the growing controversy, he said: “The new, never-before-heard claims from women who have come forward in the past two weeks with unsubstantiated, fantastical stories about things they say occurred 30, 40, or even 50 years ago have escalated far past the point of absurdity.

“These brand new claims about alleged decades-old events are becoming increasingly ridiculous, and it is completely illogical that so many people would have said nothing, done nothing, and made no reports to law enforcement or asserted civil claims if they thought they had been assaulted over a span of so many years,” Singer stated.

Thank you @MissJillScott, from the Cosby Family.