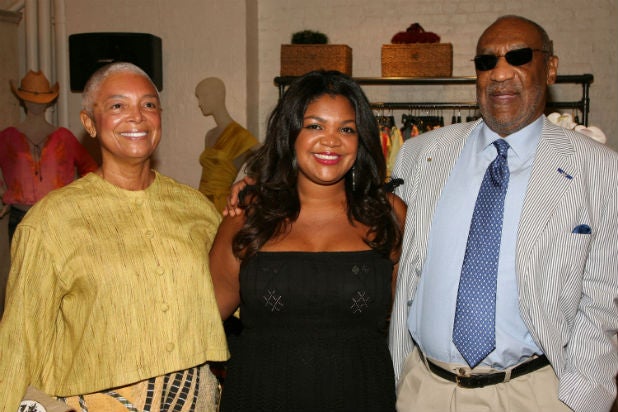 The daughter of comedian Bill Cosby, who’s been besieged by a tide of sexual assault allegations in recent weeks, has weighed in on the scandal surrounding her father.

Referring to the wholesome image that Cosby portrayed as Cliff Huxtable on his ’80s sitcom, the comedian’s daughter, Evin Cosby, told “Access Hollywood” in a statement, “He is the FATHER you thought you knew. ‘The Cosby Show’ was my today’s [sic] TV reality show. Thank you. That’s all I would like to say :).”

The younger Cosby’s statement follows a statement released Monday by the comedian’s longtime wife Camille, who opined, “There appears to be no vetting of my husband’s accusers.”

“Access Hollywood” also cites an unverified Facebook account purportedly belonging to Evin, 38, in which she said that people who falsely accuse others of rape should face punishments akin to those that rapists receive.

“Rape is a serious allegation and it is supposed to be taken VERY seriously but so is falsely accusing someone. When someone rapes a person they go to prison,” the Facebook account reads. “THAT should also happen to the person that has wrongfully accused an innocent victim. They are not ONLY destroying innocent people’s life they are ALSO making it hard for the MEN and Women to find justice when they have been raped.”

The Facebook account also addresses the numerous allegations that Cosby drugged his alleged victims before sexually assaulting them, questioning how the alleged victims could recall the events in such detail if they had been drugged.

Cosby, 77, has been rocked by a flood of allegations from women who claim that he sexually attacked them over the years, including one woman who claims that Cosby sexually battered her when she was 15 at the Playboy Mansion.

As the allegations have emerged, NBC has canceled plans to develop a comedy that would have starred Cosby, while Netflix postponed a comedy special featuring Cosby.

In the wake of the mounting allegations against Cosby, his attorney Martin Singer released a statement saying: “The new, never-before-heard claims from women who have come forward in the past two weeks with unsubstantiated, fantastical stories about things they say occurred 30, 40, or even 50 years ago have escalated far past the point of absurdity.