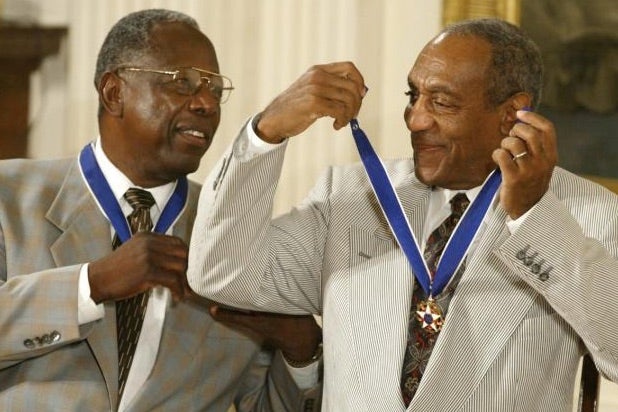 The free fall for Bill Cosby continues. A sexual violence awareness group is lobbying President Obama to revoke the former sitcom dad’s Presidential Medal of Freedom, which was awarded to him in 2002 from President George W. Bush.

“The Presidential Medal of Freedom is the highest award bestowed on civilians for their contributions to society,” a petition by the group Promoting Awareness | Victim Empowerment (PAVE) reads. “Bill Cosby does not deserve to be on the list of distinguished recipients.”

The petition has garnered close to 2,000 signatures to date and claims Cosby has lost in the court of public opinion.

“Cosby admitted to procuring drugs to have sex with women without their consent,” the petition argues. “He has been accused of serial rape by dozens of others. We cannot yet give his accusers their day in court, but we can fight back in the court of public opinion. We urge the administration to take the unprecedented action of revoking this award.”

“The Presidential Medal of Freedom is the highest honor to any American civilian, and Bill Cosby‘s name does not belong on it,” she told TIME.

The petition has drawn support in Washington, D.C. from Senator Claire McCaskill. “I don’t think that somebody who has admitted to doing that deserves a medal of any kind,” she told the St. Louis Post-Dispatch.

“I don’t know whether or not it’s legally possible to do so,” he told USA Today.