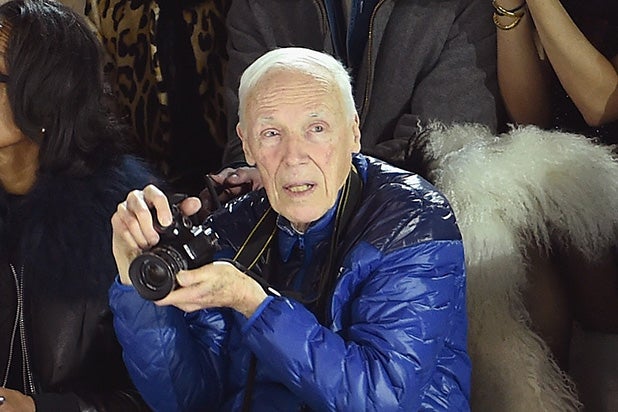 Bill Cunningham, the legendary street-style photographer for the New York Times, died on Saturday at the age of 87.

According to the Times, Cunningham was hospitalized following a stroke, and died in New York City after nearly 40 years of photographing New York style and building a reputation as one of the most iconic fashion photojournalists in the world.

The 2010 documentary “Bill Cunningham New York” by filmmaker Richard Press, featured some of the most influential people in culture and fashion singing the praises of Cunningham’s work. “We all get dressed for Bill,” Vogue editor Anna Wintour famously said of the photographer.

Cunningham has been a regular contributor to the Times since the late 1970s, but didn’t take a staff position at the paper until 1994. He was known for riding around the city on a bicycle, photographing the clothes of people from all walks of life.

“It’s important to be almost invisible, to catch people when they’re oblivious to the camera — to get the intensity of their speech, the gestures of their hands. I’m interested in capturing a moment with animation and spirit,” Cunningham once told the Times of his craft.

Also Read: New York Times Hit By New Round of Buyouts, But Promises No 'Damage' to Journalism

The world of fashion took to Twitter to mourn his death.

RIP my dear #billcunningham. You made us love fashion. You left a huge mark in all of us. … https://t.co/LfsdkbAdFN pic.twitter.com/qsZfzFz4LU

So sad to hear about Bill Cunningham passing away. He was a special man with a great talent and a love of all things fashion. A true legend.

Bill Cunningham was hospitalized after having a stroke recently. His asst John Kurdewan Instagrammed this 2 days ago pic.twitter.com/xrcpoHOSPz

This is so sad. Please watch Bill Cunningham New York, such beautiful documentary about this sweet brilliant guy. ???????? https://t.co/8HvTnnFtG5

I am stunned and saddened. Saw Bill in the office almost every day. His zest for his work was irrepressible.

???????? RIP Bill Cunningham. He had the eye & style. The wonderful combo of sight & shutter. An original. Was photographed by him once. #legend