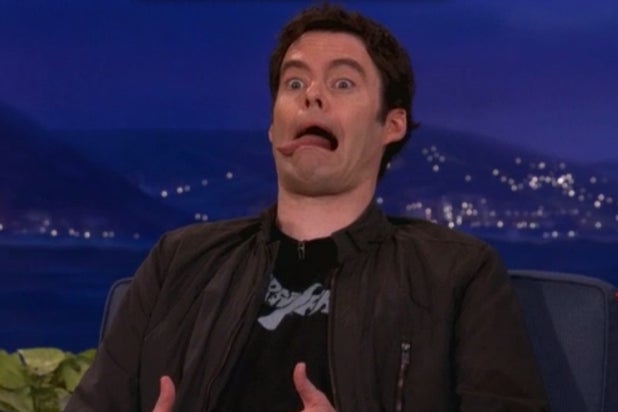 The “Cloudy With a Chance of Meatballs 2” star shared a scary new-father moment with Conan O’Brien on his TBS late-night talk show on Monday.

When his daughter Harper was about five months old, strapped to her daddy’s chest in a Baby Bjorn, a particularly aggressive male fan approached Hader on a street corner to say, “I so want to f-ck Stefan.”

The only thing the former “SNL” funnyman could do was cover his young girl’s ears, turn her away from the crazy person, and offer a modest “Thank You.”

The talented impressionist and “Conan” favorite may have moved on from the sketch comedy show that made him famous, but he has not left his boyhood fantasies behind quite yet. Hader is a huge “Star Wars” nerd, so in anticipation of the J.J. Abrams-revived “Episode VII,” the comedian cornered the writer/director to beg his way into the new installment.

Hader shared two impressions with O’Brien that he offered up to Abrams — both involve dying fictional monsters. The first was Jabba the Hut on his last breath, which had the audience rolling. Then Hader stood up, took a few steps and then a thumping prat fall for his popular dying tauntaun impression.