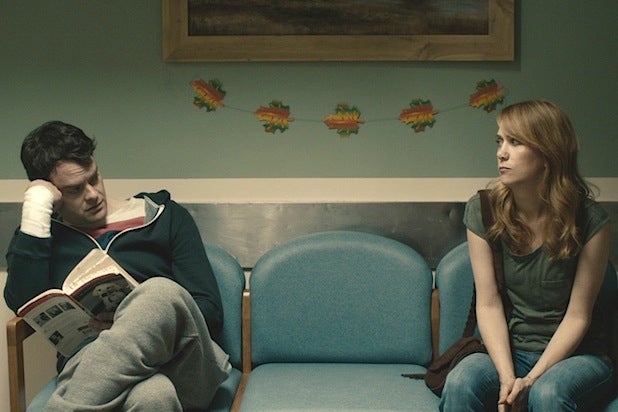 “We were thinking about some people and I must say, Bill wasn’t on my initial radar,” confessed Johnson. “(Casting director Avy Kafuman) said, ‘what about Bill Hader?’ And I said ‘I love Bill Hader, he’s hysterical, but this is a very subtle, understated thing.’ She said, ‘I saw Bill in a dramatic reading opposite Kate Winslet and he was, out of everybody up there, the most heartbreaking, moving and subtle, and I think you should really meet with him.’ So we met at a bar and had a drink. Bill and I are both big movie nerds and we kinda geeked out a little talking about directors, and I kinda had this idea that Milo is a little bit more of a nerd. Then I thought, we’ve found our nerd,” explained Johnson.

Thanks to their years on “SNL” together, Hader and Wiig have a well-honed comic chemistry that culminates in an epic, choreographed lip-syncing performance set to Starship’s power ballad “Nothing’s Gonna Stop Us Now,” which will surely be the most talked-about scene in the film. The song required “a lot of our music budget,” according to Johnson.

Both actors displayed strong dramatic chops, with Hader showing impressive range in his performance. During the post-screening Q&A, Pollak complimented Hader on his “brilliant” dramatic turn — high praise coming from a comedian who surprised critics in “The Usual Suspects” and “Casino.”

Hader plays a gay actor struggling with depression, and one audience member asked the filmmakers whether his “Skeleton Twins” character had anything in common with his flamboyant “SNL” sensation Stefon.

“The only thing they share is being gay,” remarked Johnson, who made sure to credit casting director Avy Kaufman for making him take a chance on Hader.

The Duplass brothers were instrumental is getting the project off the ground. Johnson had a relationship with the siblings, as Mark starred in his first feature “True Adolescence.” It was Johnson’s manager, Emily Rose, who suggested the director show Duplass the script to gauge his interest in executive producing.

“Jay and I loved the script. Obviously there’s the sibling stuff which we really responded to. It reminded us a little bit of like, when we made ‘Cyrus’ there was this chance for a comedic actor to take kind of a more dramatic turn. When we all started talking about [“Skeleton Twins”] and Bill’s name came up, it felt like this really exciting thing that could change the way you look at Bill. We watched Jonah go off and make “Moneyball” so… Bill’s going to be in “Moneyball 2,” joked Duplass.

Some might say the filmmakers took a risk by casting Hader in a dramatic role, but the Duplass brothers know better than to put actors into restrictive boxes. They gave Jonah Hill a chance to showcase a different side of himself in “Cyrus” and now he has two Oscar nominations for “Moneyball” and “The Wolf of Wall Street.”

Wiig was forced to miss the premiere due to a last-minute bout of strep throat, though Hader, Johnson and the Duplass brothers were joined onstage by Luke Wilson, Boyd Holbrook, co-writer Mark Heyman and producers Stephanie Langhoff, Jennifer Lee and Jacob Pechenik.

The film, which is seeking a distribution deal, was well-received by the audience, which included executives from the Weinstein Company, DreamWorks, Millennium Entertainment and Tom Rothman, as well as comedian Kevin Pollak and director Steve James (“Life Itself”).