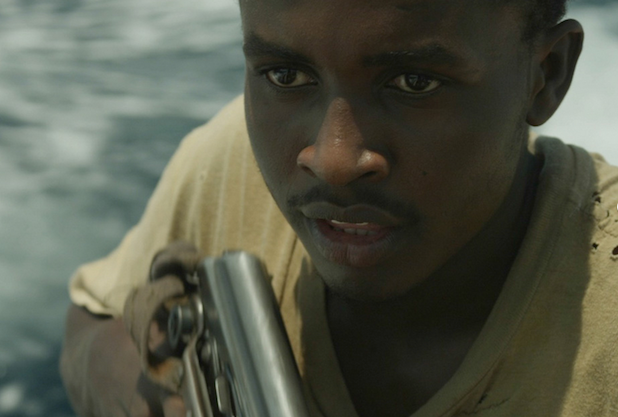 On the second day of the Sundance Film Festival, Guantanamo Bay detainees and Somali pirates upstaged movie stars like Kristen Stewart and Philip Seymour Hoffman, as the politics of terrorism dominated more than one premiere.

“Camp X-Ray,” the tale of a Guantanamo guard (played by Stewart) and her detainee (Payman Maadi), dramatized the moral complexity of the American military’s dilemma holding prisoners in a post-9/11 purgatory.  Meanwhile “Fishing Without Nets” – the feature-length version of the festival-winning short of two years ago – told the story of terror on the high seas from the pirates’ perspective, using an almost exclusively African cast and a mixture of languages.

But these weren’t the only high points of Day Two, which also included a rousing audience response to the comedy “Laggies” directed by Lynn Shelton, starring Keira Knightley as a woman in her 20s, reverting to a high school persona as she struggles to figure out her life.

“Camp X-Ray” by writer-director Peter Sattler provided a visceral view into the hellish reality of Guantanamo, where both detainees and jailers alike suffer from the lack of clarity of the mission and due process of law. Stewart plays a private assigned to the detainees (never “prisoners,” as she is admonished on day one), who wage a war of psychological attrition against their jailers. Maadi plays Ali, a man tormented by the lack of control over his own life, and the desolate day to day reality of the jail. As the moral center of the movie, he steals the show.

Lane Garrison, Stewart’s tenacious commanding officer in the film, described how the movie transformed his opinion of Guantanamo Bay. “Before I had a belief that everyone down there is responsible for 9/11, but after this film I did start asking about Gitmo,” Garrison said after the premiere screening. “There are 170 men down there no one wants, and I started thinking ‘What if one guy is innocent and is not a terrorist. Does he deserve his day in court?'”

“Guantanamo Bay is a very weird subject; it’s fraught with all sorts of prickly things to tip toe around,” Sattler said at the screening. “From the beginning I wanted to make a movie that was not propaganda at all. I hope this will in some way surprise you.”

The relationship between Stewart and Maadi reminds  the audience that inmates at Guantanamo are human after all. Maadi proves to be the movie’s most sympathetic character, relentlessly pursuing conversation with Stewart, starved for human connection.

While Stewart starts off the movie eager to prove her toughness, volunteering to subdue a detainee on her first day at the base, by the end she is expressing affection for a man who once threw feces all over her. When a member of the audience asked a question about the cast’s preparation, the bashful Stewart resisted calls for her to answer, handing the microphone to her co-star instead, who noted that they both spent the night in prison to prepare for their roles.

Guantanamo has all but disappeared from the broader political conversation, but the same cannot be said about Somali pirates, already the subject of a 2014 Oscar nominee for Best Picture, “Captain Phillips.” But “Fishing Without Nets” tells the story from the pirates’ perspective, using an almost exclusively African cast and a mixture of languages.

Like “Camp X-Ray,” “Fishing Without Nets” humanizes those often maligned or dismissed, proving that not all pirates are savages.

“The goal wasn’t to make a film that solved the world’s problems or piracy, but to tell a compelling drama and the other side of the story,” producer Eddy Moretti said after the screening, which inspired the first trip to America for several cast members. When asked what he took away from it, Kenyan star Abdikani Muktar had a simple response: he wants to act more.

Politics is standard fare in Sundance’s documentary sections. Rory Kennedy’s “Last Days of Vietnam” – describing America’s reluctance to prepare for the inevitable withdrawal from a disastrous war – drew one of Sundance’s first standing ovations on Friday while this weekend’s line-up includes “The Case against 8,” a film about the effort to overturn California’s ban on same-sex marriage, and ‘E-Team,” a documentary about human rights workers.

As programming director Trevor Groth told TheWrap Thursday, the festival courts documentaries “that are seeking truth in a way reality TV doesn’t.” Tthe commentary in narrative films should continue through the week with films such as “Difret,” about an Ethiopian lawyer defending a girl kidnapped into marriage, and “Dear White People,” about racial identity.

An anticipated drama directed by actor John Slattery and starring Philip Seymour Hoffman and Richard Jenkin’s, “God’s Pocket,” did not set off the expected buzz. The film is about a killing in a blue collar neighborhood that goes wrong. And things go from bad to worse when a local journalist comes sniffing around the story. It is up for acquisition.

But the most crowd-pleasing movie on Friday was most likely “Laggies,” written by Andrea Seigel and directed by Shelton.  A finely-observed, belated coming of age tale, “Laggies” stars Knightley as a woman so resistant to growing up that she befriends a high school student played by Chloe Moretz. (Last year’s “The Lifeguard” starring Kristen Bell treated a similar theme.) Sam Rockwell co-stars as Moretz’s single father who catches Knightley’s eye.

The film provoked laughs and warm applause and is probably the most commercial film to debut here so far.

Sharon Waxman and Jeff Sneider contributed to this report.