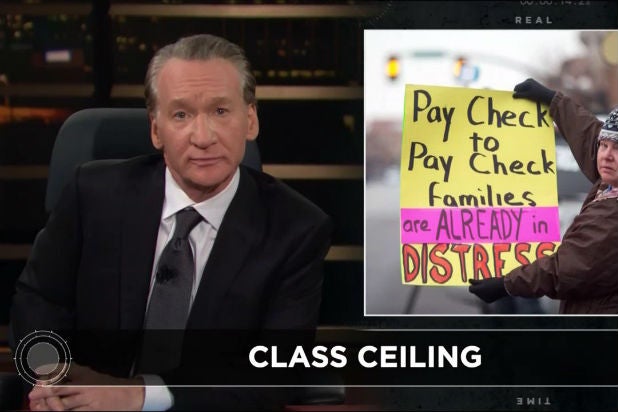 In his first episode of “Real Time” in two months, Bill Maher and former Democratic Rep. Barney Frank got into heated (but still civil) disagreement over Bernie Sanders campaign workers who were recently accused of sexual harassment.

Earlier this month, several women who worked on Sanders’ 2016 campaign said they were sexually harassed by male coworkers, and in some cases grossly underpaid. Sanders apologized to the women and thanked them for speaking out last week, and has supported them in subsequent public statements.

Maher, however, said that this situation was less about harassment, and more about what he describes as the left’s tendency to eat its own. He complained that Al Gore didn’t stand by President Clinton when he was impeached for lying under oath about his affair with Monica Lewinsky. Then Maher decried, as he did last fall, the condemnation of Sen. Al Franken by other Democrats that led Franken to step down from the Senate after he was accused of harassment by several women.

Maher also described the accusations by former Sanders volunteers as “one of the females on the campaign” basically getting “the signals wrong” over what amounts to a boss who “touched her hair.”

Frank bluntly told Maher, “That’s a bad thing to say,” and also asked what exactly the “signal” was supposed to have been. The two argued for several more minutes. Panelist Catherine Rampell also pushed back hard against Maher’s take.

Earlier, Maher kicked things off by expressing support for the teachers strike in Los Angeles, and revealed that the head of the city’s teacher’s union, Alex Caputo-Pearl, was in the audience. Caputo-Pearl then stood up and received a standing ovation.

And finally, while talking about Donald Trump and the ongoing government shutdown, Frank said that “Ann Coulter and Rush Limbaugh now have a veto,” at which point Maher announced that Coulter will be on next week’s “Real Time.” That prompted audible boos from the audience, to which Maher, who had spent considerable time insulting Coulter during the episode, said, “Yeah, that’s called a newsmaker. A policymaker. You’ll have to suck on that.”

Comedian Bill Maher has made a career of saying things that could come back to haunt him, both on his former ABC show "Politically Incorrect with Bill Maher" and on his current HBO show "Real Time with Bill Maher." Though Maher prides himself on being politically incorrect, there have been plenty of times he's said offensive things that got him into hot water. Here's a look at some of them.