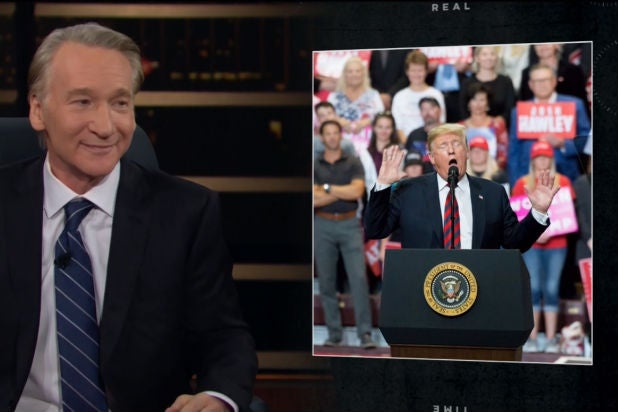 On Friday’s “Real Time,” Bill Maher said Donald Trump’s popularity with evangelical Christians is due to how much Trump resembles God. That wasn’t a compliment, as Maher demonstrated with an extremely Trump-esque reading of the Ten Commandments.

The segment came during “New Rules,” where Maher first took a victory lap over the increase in nonreligious Americans since the release 10 years ago of his anti-religion movie “Religulous.” He then rebutted the argument that atheistic societies like the Nazi Germany, Stalin’s USSR and Mao’s China were far worse — by saying those regimes were in fact state-sponsored religions.

Next, the topic of Trump voters, who Maher said are into POTUS because he’s very similar to televangelists. “He’s got Jim Baker’s hair, and Tammy Faye’s makeup. He’s immune to sex scandals. He has a sham university. He doesn’t pay taxes,” Maher joked.

But, said Maher, Trump most resembles the Old Testament version of God — in Maher’s words, “a petty, vindictive rageaholic who loved Israel” and was “obsessed with loyalty, not morality. Then he gave his Trumpean reading of the Ten Commandments.

“Commandment one: Thou shalt have no other gods. Other gods are fake news! I am the greatest god in history with the best brain,” Maher said, affecting Donald Trump’s accent and manner of speech.

“Commandment two,” Maher continued. “Only make statues of me. I am the only bronze-colored thing you should bow to. And don’t make the hands small, ’cause they’re not. And neither is something else, I guarantee.”

Also Read: John Kerry Hits Back at Trump: 'Maturity of an 8-Year-Old Boy With the Insecurity of a Teenage Girl' (Video)

Maher described the third commandment as “when you say bad things about me, it’s very unfair, VERY UNFAIR! No other god has accomplished what I did in six days, that I will tell you.”

And about the fourth commandment, the order to keep the Sabbath holy, Maher said: “You must spend one day a week not doing anything but talking about how great I am.”

Maher then said that though four spots out of ten are “variations of ‘stroke my ego’ and ‘kiss my a–,'” absent from the list are things like rape, child abuse and slavery.

“There’s only two people I can think of that would do that,” Maher said as he ended the segment. “God, and Donald Trump.”

Earlier in the episode, Maher kicked things off by chatting with former Trump advisor Steve Bannon. The two talked about how Bannon was disinvited from the New Yorker Festival, Trump’s competence, and Democratic setbacks, and then argued over whether Trump’s base, and populism in general, are racist.

That led to a blunt assessment from Maher when the interview ended: “You’re good to come here, but history is not gonna be kind to you.”