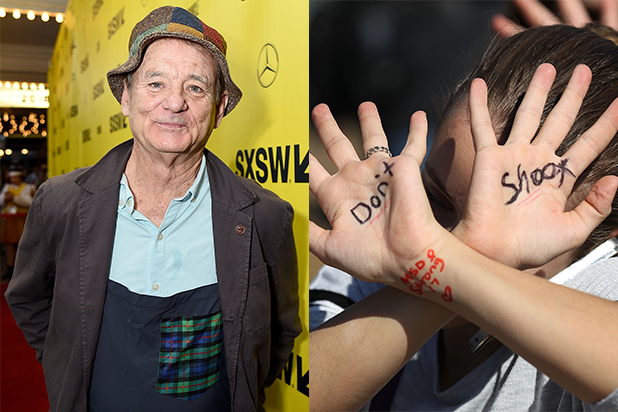 Bill Murray is standing with the Parkland students, and comparing them to the young people who “began the end of the Vietnam War.”

“It was the students who made all the news, and that noise started, and then the movement wouldn’t stop. I think, maybe, this noise that those students in Florida are making — here, today — will do something of the same nature,” the actor wrote in an op-ed for NBC’s Think.

As the anti-gun movement’s March For Our Lives beckons on Saturday in organized protests nationwide, Murray connected the wedge issue of gun control to the political divide that surrounded the Vietnam War: “People thought it was going to be the end of the world if we lost Vietnam. But that war had to stop.”

“And now, well, Vietnam is one of the most wonderful places to go in the world,” the “Groundhog’s Day” star continued. “People love going there; they love the people. And we all survived: they survived, we survived. People will survive. If you can just stop shooting at them, they really do pretty well.”

Murray, 67, contended the U.S. must be in a “horrible place” if kids are afraid to go to school. “For children to be concerned about going to school, worried about what could happen to them at school, that makes for a horrible moment,” he said. “It’s just a horrible place for us to be at.”

But the actor sees a light in the young people leading protests and demanding change in gun laws from Washington: “The thing that’s so powerful about students is that, when you haven’t had your idealism broken yet, you’re able to speak from a place that has no confusion, where there is a clear set of values.”

Murray said that he’s “sure” that “there are idealists left over the age of 18.”

“Idealism is a voice that’s inside of you; it’s your conscience,” he concluded. “That can really deteriorate along the way, depending on the road that you follow, and it can become almost dysfunctional, but it’s there. Everyone has it. Sometimes it’s just a whisper, but, in some people, it’s a shout.”