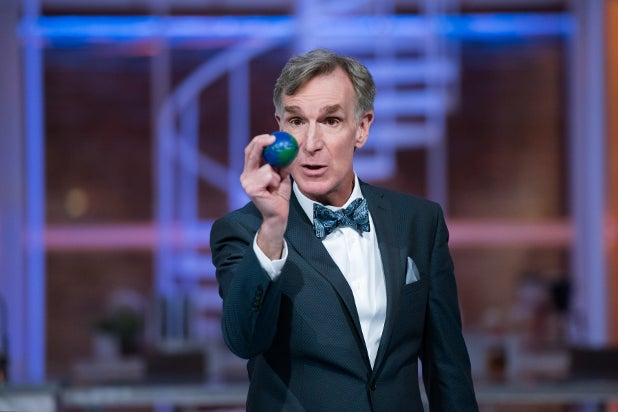 The day after “Bill Nye Saves the World” premieres on Netflix on Friday, its eponymous host is off to headline the country-wide March for Science.

Nye’s been named the event’s honorary co-chair, which means — according to him — he can go to Starbucks with the title and get a coffee for five dollars. In other words — it doesn’t change his regular joe status.

But the thing is, Nye is no regular joe.

Nye is the only entertainment personality with the movement’s distinction, although he also holds a degree in mechanical engineering. Others include Mona Hanna-Attisha, the doctor who helped expose lead poisoning in Flint, and Lydia Villa-Komaroff, a molecular biologist who helped develop the technique for making insulin. (The March for Science is a reaction from the scientific community over the Trump administration’s handling of science issues, especially when it comes to climate change.)

Bill is arguably best known for hosting the popular children’s show “Bill Nye the Science Guy” in the mid-1990s, but his history since then has made him a headliner in the climate change conversation. He has been a part of a few tense debates concerning the realities of climate change, and he’s only going to talk about it more on his new show, much to the chagrin of people who may not want to hear it.

“I’m trying to change the world,” he told TheWrap in a recent interview. “You may be tired of people like me talking about climate change. We’re tired, too!” he said. “It’s the most important problem facing humankind, in my opinion.”

Nye has grown far beyond the confines of his children’s show host persona. He still wears the bowties and puts on a cheery, enthusiastic exterior (he uses phrases like “sunshine team” in our interview), but like a lot of his original audience, his priorities lie in different areas, specifically in debunking pseudo-science. He’s taken on climate change deniers on talk shows and has been vocal in the fight for legitimizing science. This has made him some enemies, such as Fox News host Tucker Carlson, who he says is probably “anti-Bill.”

“Bill Nye Saves the World” seeks to help its audience tackle scientific issues with a critical eye. With the help of guest stars such as Zach Braff, Karlie Kloss, Tim Gunn and others, Nye and his “correspondents,” as he calls them, go around the world exploring topics such as alternative medicine and climate change — things that have scores of believers but no basis in science.

In one episode, Nye and his team address the spiritual practice of walking on burning hot coals. While people pay for retreats to learn how to do this, Nye proves that it’s possible mostly with physics.

In another, he highlights alternative medicine practices, seeking to educate people on the realities of the industry in a literal sense. These methods of healing may have mental effects but for Nye, there’s no basis in science.

“If you go to a ‘foo-foo’ grocery store where the food is whole, for example, most of their money… is made off these alternative medicines or dietary supplements, and most of them don’t do anything,” he said. “I think people will be interested to watch it.”

While he’s interested in how things look now, he’s also looking to the future. In the interview, he mentions his fascination with self-driving cars and artificial intelligence, predicting that by April 2034, driving a car will be a skill like horseback riding: only a select number of people will know how to do it.

“My grandfather apparently rode horses to run into World War I,” Nye said. Now, nobody rides horses. “Everything changed in just 20 years.”

Through his work both on the show and off, Nye seeks to teach people how to think critically. He realizes that people have a cognitive dissonance in regards to certain issues like climate change — understandable to him considering how isolated certain parts of the United States are and how belief systems work, he says — but he hopes that people can learn to use reason.

“[The audience believes] they can influence the future and leave the world better than when they found it. Come on, it’s a half hour. That’s plenty of time. Make no small plans, people!”

In the meantime, you can watch his show, which premieres Friday at midnight, or you can attend one of the many March for Science protests happening around the country on Saturday.

You can do worse on a weekend. Nye says it’s going to be a “party.”

“We’re going to have bands and happy food trucks and inspiring speeches from thoughtful, hilarious people,” he said.