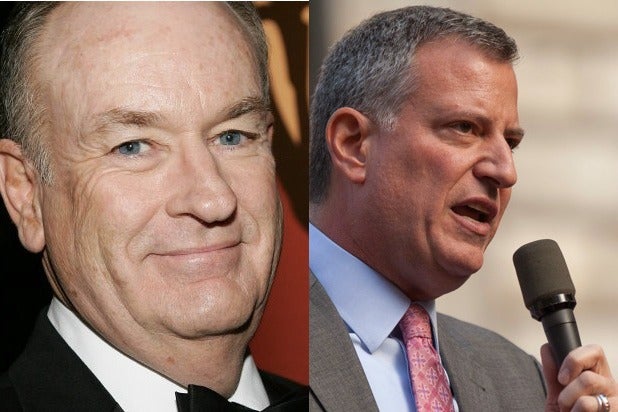 On his show Monday night, Bill O’Reilly called on NYC Mayor Bill de Blasio to resign for his handling of race relations in the city that the Fox News host believes has contributed to hostility toward police.

“He is a far left individual who is incompetent,” O’Reilly said. “He can not run the city of New York.”

However, O’Reilly didn’t go as far as suggesting de Blasio had direct responsibility for Ismaaiyl Brinsley ambushing and killing police officers Wenjian Liu and Rafael Ramos on Saturday, but he did suggest he’s made the situation worse.

“He is an anti-police individual. Now he’s in trouble, now he’s trying to backdrop … who’s his best friend? Al Sharpton; a racial provocateur, an anti-cop individual, is de Blasia’s best friend — that says it all,” O’Reilly said.

Also Read: O’Reilly and McCain Come to Blows: ‘My Job to Interrogate You!’ (Video)

He then slammed de Blasio’s parenting, pointing out that the Mayor has warned his black child he may face dangers dealing with police officers: “What kind of responsible father tells that to his son?”

O’Reilly concluded de Blasio has “disgraced” the office of the NYC mayor and should resign.

“This is an individual who should resign today — today. He cannot run this city, he’s lost control of the police department and their respect. They will never come back no matter what he says, because he sided with the protesters.”