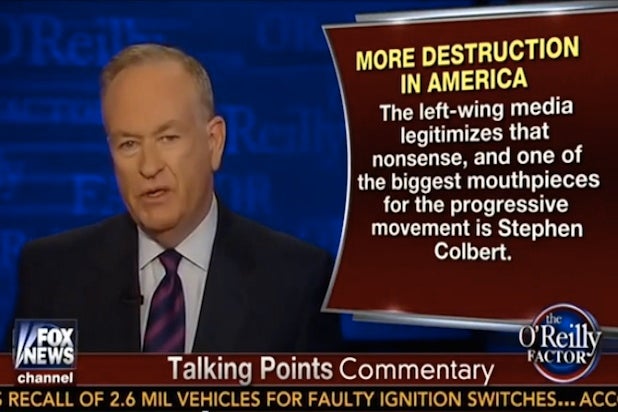 “The Colbert Report” host models his egocentric, rightwing comic creation on Bill O’Reilly, but a recent bit that Colbert did mocking the  Fox News commentator’s remarks about equality has left his conservative icon fuming. O’Reilly claims that Colbert misrepresented his remarks to make him appear to be on the side of division and prejudice, all for the sake of comedy.

“Mr. Colbert is a deceiver,” O’Reilly hit back. “I strongly believe in fighting for equality and also believe institutional bias should be against the law. What I oppose is government trying to impose equality because every human being is different.”

“The left-wing media legitimizes that nonsense and one of the biggest mouth pieces for the progressive movement is Stephen Colbert,” O’Reilly explained. “Only about a million people watches late night program at 11, but he is the darling of the far left Internet which rhapsodizes over him.”

To prove his point, O’Reilly dusted off footage of Colbert lampooning him for saying equality was dragging down President Obama and the country.

“Maybe Colbert should take a look at China and the former Soviet Union to see just how the imposition of equality really works,” O’Reilly said. “Maybe Colbert should understand that Dr. King gave his life for equality of opportunity. And his dream was that human beings would be judged by the quality of their character. Something Mr. Colbert might want to think about as he deceives his audience.”

O’Reilly went on to call Colbert an “ideological fanatic,” whose humor is aimed at progressives.

“Colbert can be dismissed as clueless but the guy does do damage,” O’Reilly said. “Because he gives cover to powerful people who are selling Americans a big lie that this country is bad. That it intentionally oppresses many of its own citizens.”