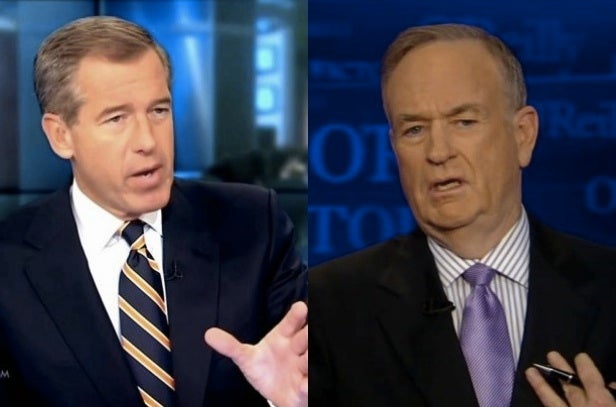 When it was revealed that Williams’ claim he was in a helicopter shot down by RPG fire during the Iraq War was erroneous, the media onslaught was unrelenting until NBC News suspended the anchor for six months — less than a week after the firestorm began.

Conversely, after questionable claims by O’Reilly about his Falkands War reporting solicited heavy initial coverage, the media quickly took its foot off the gas.

O’Reilly embarked on a whirlwind tour of defensive interviews, prompting reporters and media pundits to look less rigidly at subsequent contested O’Reilly assertions that he: witnessed the suicide of Lee Harvey Oswald associate George de Mohrenschildt; watched four nuns get murdered in El Salvador; and was assaulted by protestors during the Los Angeles riots.

Politico’s Dylan Byers focused less on the disputed claims and more on the motives of the Mother Jones reporters — David Corn and Daniel Schulman — who broke the initial story that questioned O’Reilly’s depiction of “war zone” coverage during the 1980s.

New York Magazine’s Gabriel Sherman, who wrote an unauthorized biography about Fox News CEO Roger Ailes, examined why the Mother Jones report “backfired,” noting that it gave O’Reilly a huge ratings opportunity — and an additional opportunity to go after one of his favorite targets: the biased liberal media.

Sally Quinn, widow of legendary Washington Post editor Ben Bradlee and a friend of O’Reilly’s, told The Daily Beast’s Lloyd Grove that comparisons between both men are absurd.

“I think it’s ridiculous to compare Bill O’Reilly to Brian Williams,” she said. “O’Reilly is an entertainer and everything he does is totally subjective, including his memories.”

“I think the media reporting should hold  to the same standard ,” former Fox News contributor and American University Journalism Professor Jane Hall told TheWrap. “He reaches how many millions of people a night? If people in the media are dismissing him as, ‘he’s an entertainer,’ I think they’re vastly underestimating his influence.”

A Fox News spokesperson told The Wrap Hall’s contract was not renewed and she was let go; Hall says she left of her own volition—after Fox News offered her a contract she decided not to renew.

Hall thinks NBC News’ swift response to the Williams scandal was appropriate in the context of the sober “Nightly News” brand, but emphasized O’Reilly shouldn’t be let off the hook.

“He is an opinion host, but I don’t think that means reporters shouldn’t be writing about it given his influence and his ratings,” adding that the question reporters need to ask is, “what is your audience, what is your reach, what is your political influence?”

Jeffrey Jones, director of the Peabody Awards, broke down the criteria journalists must consider when comparing NBC News to Fox News.

“Journalists are audiences too; it speaks to how journalists perceive the two organizations,” he said about journalists who expect more veracity from Williams’ evening newscast compared to O’Reilly’s commentary.

“[Journalists are] seeing Williams as a threat to the practice of journalism. Fox News may be the more insidious threat to the practice of journalism, but Fox has been in business for almost 20 years. Many mainstream journalists say, ‘well they serve a function for a small group of older viewers [approximately 68-year-old median age] and for a very particular demographic. Journalists see one as a threat to who and what they are as journalists. As for what O’Reilly and [Fox] produce as “journalism”—that ship has long since sailed.”

Jones also invoked the influence that recently — and soon to be — departed Comedy Central satirists have had on how journalists cover Fox News.

“Haven’t Jon Stewart and Steven Colbert, for at least a decade, made the case that Bill O’Reilly and Fox News’ relationship to facts and reality is an extremely tenuous relationship?”

Beyond the journalistic implications, marketing expert John Tantillo — who knows O’Reilly and coined the term “O’Reilly Factor” — said the O’Reilly-Williams comparison is a matter of brand perception.

“Criticizing O’Reilly plays into O’Reilly’s brand of controversy and being provocative. That’s what everyone is missing … You’re playing to his strong suit and, by result, strengthening his brand.”

Will O’Reilly’s brand take a hit if it turns out he hasn’t been truthful?

“No, as crazy as it sounds. The more criticism he’s getting, the more respect he’s going to get from his target market.”

Brian Williams recently began a six-month, unpaid suspension. Despite recent admissions by network representatives of inconsistencies in several of O’Reilly’s accounts, he hasn’t been reprimanded by Fox News for any of the claims in question.

A Fox News spokesperson issues the following statement to TheWrap in response to the accusations against O’Reilly:

“Bill O’Reilly has already addressed several claims leveled against him. This is nothing more than an orchestrated campaign by far left advocates Mother Jones and Media Matters. Responding to the unproven accusation du jour has become an exercise in futility. FOX News maintains its staunch support of O’Reilly, who is no stranger to calculated onslaughts.”