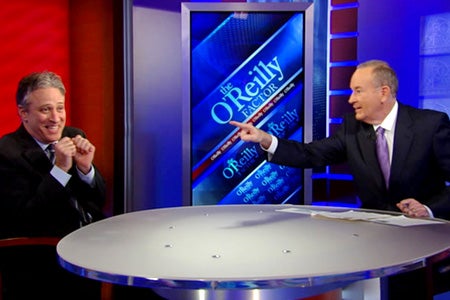 Jon Stewart appeared on “The O’Reilly Factor” on Wednesday — the first time the “Daily Show” host has been on the #1 rated Fox News show since 2004.

Part one of the interview – which lasted about 35 minutes I’m told – aired Wednesday, with the rest set to air tonight.

It made for entertaining television, although it wasn’t as contentious or adversarial as one would’ve hope for. (Also, either Jon Stewart is Tom Cruise-like small, or the Fox News producers were taking a subtle jab by drowning his frame in on-screen lower-thirds.)

The most interesting part came during a discussion about Fox News itself, and even that was laced with niceties. Said Stewart:

“Fox News is the most passionate and sells the clearest narrative of any news organization.”

"You have become, in some ways, the voice of sanity here, which is like being the thinnest kid at fat camp."

Watch both parts from round one here: