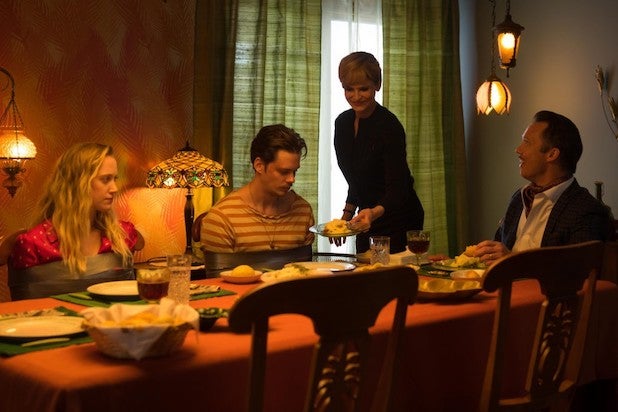 “Villains” made its premiere at this year’s SXSW film festival, and it also stars Jeffrey Donovan and Kyra Sedgwick playing two sadistic homeowners who hold a pair of amateur criminals hostage after the young criminals break into their suburban home and stumble upon their dark secret.

Dan Berk and Robert Olsen directed the film for Bron Studios’ genre arm The Realm. Gunpowder & Sky is partnering with MoviePass Films for a release this summer.

Also Read: 'IT: Chapter 2' - Pennywise Is Back in CinemaCon Footage

“Villains” was produced by Trevor White, Tim White and Allan Mandelbaum of Star Thrower Entertainment, and Garrick Dion of The Realm. The film marks the second collaboration between Gunpowder & Sky and The Realm, following the release of the sci-fi adventure “Prospect” last year. Executive producers are Bron’s Aaron L. Gilbert, Creative Wealth Media’s Jason Cloth, plus Kevin Turen, Chadd Harbold, and Per Melita.

“Our brilliant cast and crew worked tirelessly to make this movie something special, and there’s no better affirmation of that goal than finding a home at Gunpowder & Sky. They have a track record of putting out bold and audacious movies, and we’re incredibly proud that ‘Villains’ will land among that company,” directors Berk and Olsen said in a statement.

The filmmakers are represented by UTA and Kaplan/Perrone Entertainment.

Gunpowder & Sky currently has “Her Smell,” starring Elisabeth Moss, in theaters, and it also released the 20th Century Fox and Vice Films project “Lords of Chaos.”

MoviePass Films recently pivoted to production and financing, receiving a production credit on the Olivia Wilde thriller “A Vigilante,” and is currently shooting “Axis Sally” with Al Pacino.