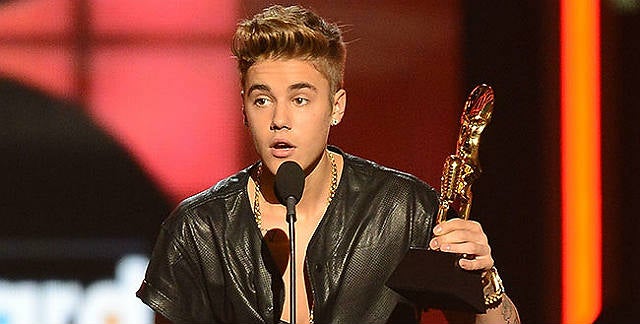 From superstars getting booed by the audience to singers falling on audience members' heads to Nicki Minaj’s naughty lap dance and awkward backstage smooches, there was plenty of sin at the MGM Grand Garden Arena in Las Vegas. Here are 5 of the most talked-about moments from last night's show.

1. Justin Bieber Booed: While accepting the Milestone Award (a new fan-voted award given to an artist who shows the most musical ingenuity and innovation), Justin Bieber came off a little too cocky for the audience's taste, and his speech – in which the teen superstar praised his own career and said he "should be taken seriously" – illicited loud boos from the crowd. Billboard Music Awards host Tracy Morgan – who himself knows a thing or two (or three!) about being booed, tried to negate the situation, saying, "Don’t be booin' nobody, this ain’t 'Showtime at the Apollo."

2. Backstage Smooch: The Biebs had a busy night last night. At some point in the evening, Justin grabbed on-again, off-again girlfriend Selena Gomez‘s arm backstage, and after exchanging a few words, the pair exchanged a couple of awkward kisses. But Selena didn’t hang with Bieber backstage for too long – her pal Taylor Swift quickly pulled the singer away from her ex, and Taylor looked more than a little irritated. The captured moment generated GIFs galore around the internet.

3. Swift Victory: And speaking of Taylor Swift, the 23-year-old singer-songwriter dominated last night's awards show with eight wins, including Artist of the Year and top Billboard 200 album, for “Red.” The young singer, whose very public love life (ahem, breakups) are always making headlines, humbly thanked her fans for being "the longest and best relationship I ever had."

4. J.Lo Ruffles a Few (Of Her Own) Feathers: We're used to Jennifer Lopez taking her performances to new heights, but was the Puerto Rican superstar gearing up to fly at last night's show? During her performance of “Live It Up” with Pitbull, J.Lo wore what appeared to be two feathered Muppets. Check out J.Lo's wings here.

5. Nicki Minaj Gets Naughty: During her sexy performance of "High School" on last night's show, Nicki Minaj — who won Top Rap Artist at last night’s show — showed off her ample backside as she ushered Lil Wayne into a private thrown for a very naughty lapdance wearing THIS! After the show, Nicki said Weezy refused to touch her: "He's a southern gentleman," she explained, "which people don't realize."

6. Bad Landing! During his performance of his hit song "Adorn" at last night's show, R&B singer Miguel tried to jump over a pit of fans and when he miscalculated the jump, he accidentally landed on one of his fans, and kicked another fan in the arm. The singer later met one of the victims, a woman named Khyati after the show and tweeted that he “got caught up in the moment, thanks goodness Khyati is okay.”