Billie Eilish took a swing at Jimmy Kimmel on his show Wednesday night, punching him square in the gut. Don’t worry, though — the late-night host told her to do it. It was all part of a joint mission to cross items off the singer’s childhood bucket list.

To be clear, “punch Jimmy Kimmel” wasn’t the item in question. Young Billie really just wanted to “punch someone.” But, since it’s not a good look to have a late-night guest punch an audience member — though plenty of fans in the audience were certainly willing to take the hit — Kimmel offered himself up as Eilish’s personal punching bag instead. Plus, as he asserted, “I think you should punch me because I’m probably the strongest person here.”

“And don’t hold back,” Kimmel encouraged. “You just go ahead, I’m like a seal. I’m telling you. Hit me as hard as you want in the stomach. I promise.” 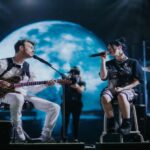 Eilish then admitted that, really, her bucket list goal was always to punch someone in the face, not the stomach. But she was more than OK taking what she could get. The singer didn’t even remove her many rings before delivering the blow (which Kimmel did indeed take like a champ).

You can see the whole bucket list segment in the video above.

Kimmel also made sure to help Eilish cross a few more items off her bucket list, including getting thrown out of a Target, getting a mouse and cutting someone’s hair. And when it came to that last one, Eilish did go for an audience member — because once again, there were plenty of willing participants. The Grammy winner didn’t give the young woman a total makeover, but she did the brave volunteer some bangs — and then kept the severed strands as a trophy of her work.