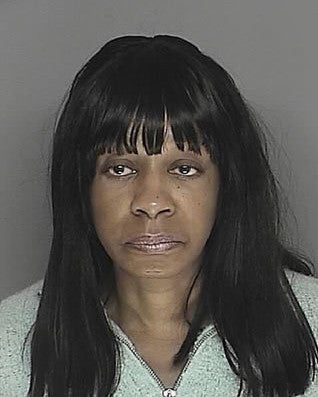 The woman who calls herself Billie Jean Jackson met her Waterloo – or rather, her Never, Neverland — in court on Tuesday.

Jackson is also the woman who calls herself the mother of the late Michael Jackson’s 7-year-old son, Prince Michael II, aka Blanket. Her real name is Lavon Powlis.

She began legal proceedings late last year, when Jackson was alive, to gain weekend visitation rights, participation in Blanket’s education — and a billion dollars in support.

After the King of Pop’s death, Billie Jean (she says Jackson named the song after her) shifted legal gears, petitioning for the custody of young Blanket.

The 60-ish Jackson has a long legal record of both suing Jackson and trespassing at his Neverland Ranch — which has earned her several arrests (see mugshot) and court suggestions to seek psychiatric help.

Before her hearing Tuesday morning, she anxiously got up and left Department 5 in the civil courts building several times, wheeling her large maroon leather bookbag out with her.

To his credit, Judge Mitchell Beckloff played it straight and showed her plenty of patience in allowing her to plead her case. Michael Jackson estate attorney Diane Goodman was on hand to parry any trouble from a speakerphone.

“What proof can you show me you’re the mother?” Judge Beckloff asked Billie Jean, a slightly built woman who wore a kind of pink tank tube and slacks. “If you’re the mother, you were in a hospital, right?”

“No, no, there are other ways …” Jackson trailed off.

“The birth record says it was a surrogacy,” Goodman’s voice broke in.

“I was pregnant, and Michael took him,” Jackson said. “If we took DNA tests, that would prove it.”

But the judge needed a little more evidence before he began ordering such tests. Jackson tried to provide it with circular arguments.

When Beckloff tried to get Jackson focused on documents and paperwork, she swam toward fantasy and paranoia.

“I don’t think I saw a doctor,” she told Beckloff. “I don’t want to tell you in open court about it because it sounds like a miracle. Michael sings to me on his album. He called me Lavon, a name my mother gave me … I’ve been stalked. The police would threaten me. Michael’s family threatened me and had me arrested.”

On one level Jackson’s sputtering performance was grotesquely sad. But then, it also confirmed the wonder of a democracy that allows even the delusional their moment in court, although that moment may take up many people’s time.

Nevertheless, it’s also worth remembering that Jackson’s story was carried by much of the American and British media at the time it first surfaced — Extra, Access Hollywood, WENN, Associated Press and others all carried stories of varying credulity about her claim, stories that, startlingly enough, got a second wind following the pop singer’s death.

But there were no celebrity or mainstream media in Department 5 Tuesday. After listening to Jackson speak some more about a Santa Barbara County Sheriff’s Department plot to keep her and Michael Jackson separated, Judge Beckloff declared she hadn’t shown him a “biological connection” to Blanket and denied her petition.

Jackson stood silently for a moment, absorbing the news that her moment in the sun was over. She turned away from the bench and dragged her baggage cart out of the courtroom.

The light in her eyes went out. She had lost more than a billion dollars.