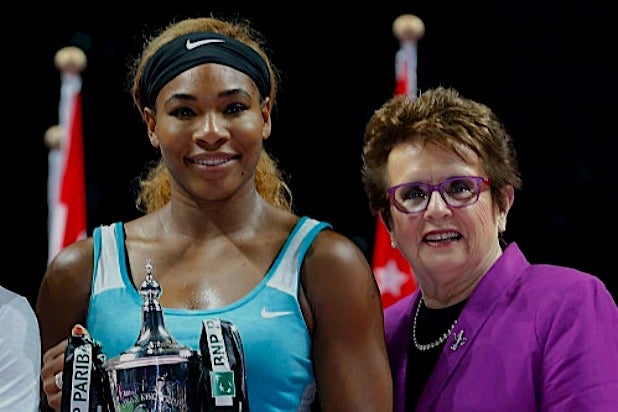 Tennis icon Billie Jean King says Serena Williams was a victim of an “abuse of power” when she was penalized at a game at the U.S. Open women’s final, following a tense argument with the chair umpire.

King, in a Washington Post op-ed on Sunday, blasted the rule barring players from receiving coaching on each point — the rule for which chair umpire Carlos Ramos initially dinged Williams. If tennis would “catch up with the 21st century and allow coaching on every point,” this fiasco could’ve been avoided, King argued.

“The effect was an abuse of power: Ramos crossed the line,” she wrote. “He made himself part of the match. He involved himself in the end result. An umpire’s job is to keep control of the match, and he let it get out of control.”

If you missed it, Williams broke down in tears on Saturday during the second set of her match with Naomi Osaka, after Ramos issued a series of code violations — beginning with a warning when her coach Patrick Mouratoglou signaled to her from his place in the stands, a mid-match coaching that is a violation of the rules (though seldom called by officials).

A second violation for Williams’ confrontation with Ramos led to the loss of a point. But she was docked an entire game when she confronted Ramos a second time: “You stole a point from me. You’re a thief, too.”

That set the stage for Osaka, a 20-year-old who played brilliantly throughout the tournament, to serve out the second set for her first Grand Slam win.

Williams’ squabble with Ramos sparked a weekend’s worth of debate, with many slamming both the umpire and the tennis star for their roles.

King said “Williams could have taken some responsibility and moved on after the first warning,” and worried Osaka’s “stellar play” would be overshadowed. But King added “women have a right, though, to speak out against injustice,” while defending’s Williams’ passionate response.

“Women are treated differently in most arenas of life. This is especially true for women of color. And what played out on the court yesterday happens far too often,” King wrote. “It happens in sports, in the office and in public service. Ultimately, a woman was penalized for standing up for herself. A woman faced down sexism, and the match went on.”

King made headlines late last month when she defended Williams after she was banned from wearing “Black Panther”-inspired catsuit to future French Open competitions. “The policing of women’s bodies must end. The ‘respect’ that’s needed is for the exceptional talent @serenawilliams brings to the game. Criticizing what she wears to work is where the true disrespect lies,” King tweeted.