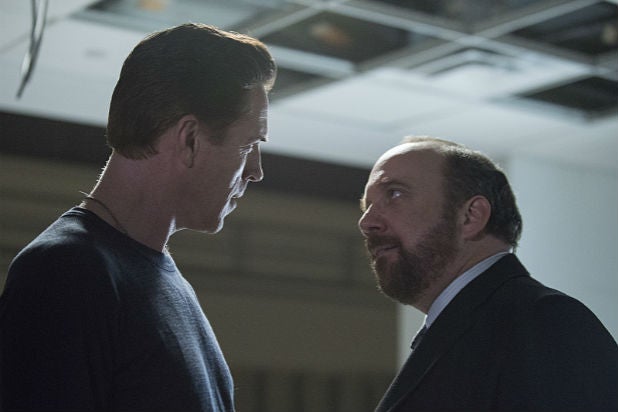 (Spoiler alert: Please do not keep reading if you have not seen the Season 1 finale of “Billions”)

“This season is largely seen through the prism of these two guys,” showrunner Brian Koppelman told TheWrap. “They don’t face off that much in person. We felt like at some point we want to see the sheriff and the outlaw stand their 10 paces.

“And a great time to see that is right at the end of the season. We were building toward that for a long time,” he added.

But let’s go back for a moment.

The episode begins with Chuck pressing forward with an investigation into Axe based on data he stole from Wendy (Maggie Siff) and her session notes. Chuck tasks Lonnie Watley (Malachi Weir) with digging into the story that Axe bribed local police to get one of his employees out of a sticky situation, which we saw earlier in the season.

Meanwhile, Axe is trying to raise capital to make up for his poor trade that cost him upwards of $1 billion in a previous episode. After several failures, Axe succesfully convinces an investor to put money into Axe Capital.

But his glee is short lived. Raul Gomez (Ruben Santiago-Hudson), the head of the police pension fund, tips off Axe that the U.S. Attorney’s office has been digging into what happened the night he bribed the officers.

Wendy knows that Chuck must have stolen the information and confronts him that night. They get into a highly emotional fight in which she questions his ethics, while he questions hers for working for a criminal organization like Axe Capital. Eventually, Wendy kicks Chuck out of their home.

“We thought they both had really valid points of view but there was a lot of irony in the scene for both of them,” showrunner David Levien told TheWrap.

“What we find to be true is that often the people — even in a marriage that has respect and love — people can end up fighting to win or carrying grudges,” Koppelman added. “And even though these people are incredibly smart and respect each other a lot, those dynamics still hold. They’re both very introspective in that scene.”

Faced with the fact that he obtained evidence by illegal means, Chuck shuts down the new investigation into Axe. Wendy then goes to Axe with recording she secretly made of her argument with Chuck in which he admits to stealing her notes.

Axe is ecstatic. He promises to erase any damaging information he has on Wendy, gives her a $5 million bonus, and offers her triple that amount in exchange for the recording. But Wendy reminds Axe that Chuck is still the father of her children and erases the recording. She then quits her job at the company.

“The place she ends up is the culmination of being caught between these two powerful forces,” Levien said. “She is in a position of having your own agency but having it come under the sway of these powerful hands and wanting to reclaim that agnecy by getting out from under.”

Chuck realizes that Axe must have an informant in the U.S. Attorney’s office. To flush him out, Chuck supplies false information that he has listening devices hidden at Axe Capital.

Axe and a security team desperately tear the office apart trying to find the bugs but come up empty. As Axe sits in the ruins of his empire, Chuck arrives and the two finally square off. Chuck warns Axe that the only thing more dangerous than an enemy with considerable resources is one with nothing to lose.