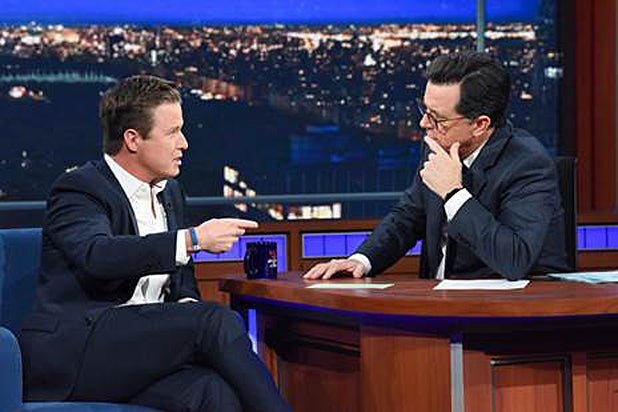 One day after his scathing New York Times op-ed about Donald Trump’s infamous “grab ‘em by the p—-y” recording, former “Access Hollywood” Billy Bush appeared on “The Late Show With Stephen Colbert” to explain his choice of timing.

Bush said he was moved by the stories of the 20 women who have come forward to accuse the President of sexual misconduct. “Twenty women don’t get together and say ‘hey you know what would be really fun? Let’s take down a powerful guy together.’ No they don’t,” Bush told Colbert on Monday night’s show.

He went on to say that he had avoided reading about their stories in detail until recently but was inspired to do so after a late November report in the Times that Trump has been privately denying he is the person recorded on an “Access Hollywood” hot mic, bragging to Bush about extremely aggressive behavior toward women.

Also Read: Billy Bush in New York Times: Yes, That Was Trump Who Said 'Grab 'Em by the P--y'

Trump admitted it was his voice when the recording was leaked during the 2016 presidential election campaign, dismissing it as “locker room banter,” and Bush reiterated in his op-ed Sunday that it was Trump. “He said it. ‘Grab ‘em by the p—y.’ Of course he said it,” Bush wrote, adding that seven other men witnessed Trump’s commentary.

See the full clip from tonight’s “The Late Show with Stephen Colbert” below.

TONIGHT: After his op-ed in the @NYTimes, Billy Bush stops by #LSSC to reveal why he's speaking out now, and to talk about what really happened on that bus. pic.twitter.com/buSWhph3mJ