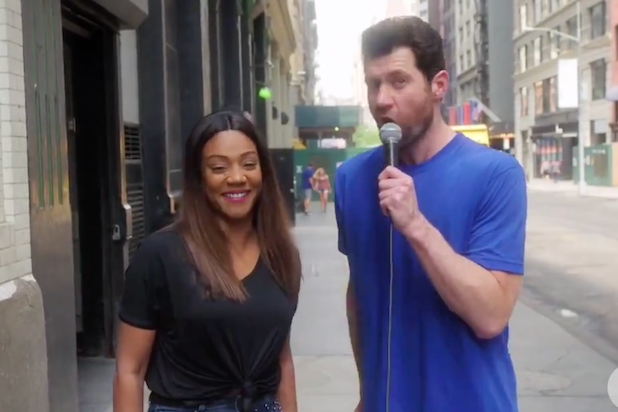 Get ready for a gender inclusive “Hocus Pocus,” witches.

In the newest “Billy on the Street,” Billy Eichner headed out with Tiffany Haddish (get out of the way, because her profile is really growing) with the announcement that they will make a more diverse remake of Disney’s Halloween favorite “Hocus Pocus.” He’s gay, she’s black, so they set out to find the third diverse member of their witches trio.

Better yet, call it “#WokusPocus.”

Also Read: Emma Stone and Billy Eichner Talk to New Yorkers About Instagram in 'Billy on the Street' Return (Video)

“Yes! A Chinese lesbian witch! Crazy Witch Asians,” Eichner shouted at one New York pedestrian in the video upon learning that she was from China and was also gay.

Eichner asked another woman if she thinks Americans are ready to see a Disney Channel movie classic remade with a diverse cast.

“They ain’t ready, but they better get ready,” the woman replied.

Eichner’s “Billy on the Street” is back as presented by Lyft Entertainment. He previously hit the streets with Emma Stone in the return of his hit show. Watch the latest segment via his Twitter below.

BIG NEWS!!! @TiffanyHaddish and I will star as witches in a remake of HOCUS POCUS!!! Watch us hit the street to find someone to play the 3rd witch in our more diverse cast!!! pic.twitter.com/XHBaup9Xtx