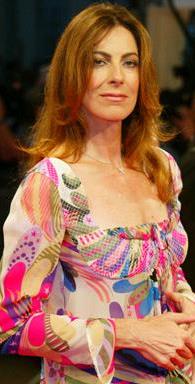 In spite of director Kathryn Bigelow’s incredible intelligence, her extreme beauty inside and out (knockout gorgeous movie star looks, matched by her beautiful soul within) and her amazing directorial genius, her personal neurosis and severely damaged feminine capacity will never allow her – in spite of her directorial genius – to make a commercially successful film, a box office hit that people want to see.

Why the difference in the grosses of these two astonishing directorial geniuses?

Kathryn’s has no heart, no love story, little or no feminine compassion or kindness.

She has a capacity to create tension in a film that almost no one else has.

Kathryn has that incredible ability to make a film that transcends being a film and, as the critic Rex Reed said about "Billy Jack" years ago, “…it becomes real life.” But with Kathryn’s films, it is the most painful slice of real life she gives us. In "Hurt Locker," your stomach is in a knot the entire time with one of the most negative, hostile and painful endings ever: Kathryn has our hero, Staff Sgt. William James, leave his loving, caring, responsible wife and his beautiful son to cater to his thanatos, his suicidal death wish and insatiable need to constantly prove his manhood by risking death and killing people while doing so.

The one thing you never do in a Kathryn Bigelow film is come out feeling inspired, good about yourself or 10 feet tall. You come out feeling more than just kicked in the gut, but that you left the dentist’s office after having not just one root canal done but four.

The brilliant director gives us an X-ray into her lack of feminine capacity at the very end of the picture, when our suicidal hero comes home. First, in two scenes with his adoring wife, who has borne the gigantic, horrid responsibility of raising their son alone while waiting for the phone to ring any moment, telling her of her husband’s death. We never even see the warm greeting he gets from her and his son when he first comes home.

The only two scenes we see between this great-looking couple is the wife ignoring him as she cooks dinner, and shoving him some vegetables to cut up to help her. His boredom wreaks havoc with doing this simple task.

The next scene between the two is in the grocery store, where he’s irritated by having to choose which box of cereal to pick off a shelf that’s lined with dozens of cereal choices.

And the only scene we see in which James is with his son has nothing to do with the way a father who has agonized over being separated from his son for so long would behave. Instead, he gives a speech explaining why he hates being with his son and has to go back and be a killer.

One of the key ingredients that people demand to see in a film is credibility, the “What if?” principle. What if … this character was in this exact situation, what would he or she do – what would I do if I were that character in that same situation? Every single person we interviewed said that when they first arrived home they would be overwhelmed with joy, overcome with powerful emotions at seeing their spouse and their son. Maybe after a period of the thrill and ecstasis of seeing their beloved family again, they could start to get bored. 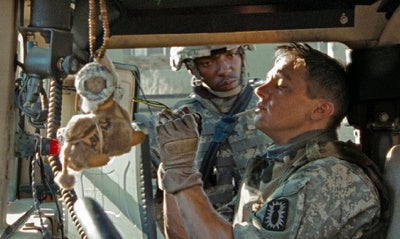 Kathryn gives us none of James’ ecstatic joy at seeing his loved ones. Not one moment! Instead, she concentrates only on his instant boredom, so anxious is she as a filmmaker to get him back to the killing fields, which she thrives on and masterfully creates for us.

The final scene of James walking away from the camera, excited about being back to continue his rendezvous with death, is Kathryn’s way of proving her thesis that war is a drug. This is a superb insight into the human nature of so many soldiers, mercenaries and politicians, to whom war is a drug.

Because she has denied us even the most basic human emotions of love and joy between a soldier and his family, and because the ending of her film is such a downer, instead of being excited about this insight into the horror of war, we are irritated and disappointed by the ugly ending of the film, which causes us to miss the point she is trying to make.

But she reveals to us another truth: Making violent, macho films about war is a drug for Kathryn.

Tragically for the film world, and the entire world of film audiences, unless there is a radical growth in her psyche, Kathryn will never be able to use her incredible directorial genius to give us a love story – a picture people want to see and can’t wait to see, a major box office hit.

She should take a page from her ex-husband and good friend, James Cameron, and learn the secret of making a runaway box office hit. Cameron can teach that lesson to every one of us who want to make films that people want to see because we have something we want to say to enlighten them or enrich their lives by giving them a couple of hours of laughter to relieve the dull gray we all live in every day.

BIO Tom Laughlin
Tom Laughlin is the star and creator of the "Billy Jack" series of films, and along with his wife, co-star and co-creator, Delores Taylor, the inventor of the "open wide" method of marketing films that forever changed the motion picture business. Also a respected Jungian psychologist, he teaches at medical schools and departments of psychiatry from Yale to Stanford to UCLA. His books include "The 9 Indispensable Ingredients in Writing the Hit Film, TV Show, Play and Novel"; "The Psychology of Cancer"; "Jungian Psychology, Vols. 1 & 2"; "Jungian Theory and Therapy."

Tom Laughlin is the star and creator of the "Billy Jack" series of films, and along with his wife, co-star and co-creator, Delores Taylor, the inventor of the "open wide" method of marketing films that forever changed the motion picture business. Also a respected Jungian psychologist, he teaches at medical schools and departments of psychiatry from Yale to Stanford to UCLA. His books include "The 9 Indispensable Ingredients in Writing the Hit Film, TV Show, Play and Novel"; "The Psychology of Cancer"; "Jungian Psychology, Vols. 1 & 2"; "Jungian Theory and Therapy."
x
Looks like you're enjoying reading